Skip to content
Master-Athlete.Com
Home » Blog » Older… Not Old
Well what way could I start this website other than writing about my introduction to becoming a Master Athlete.
There comes a moment in every aging athletes life when they except the younger generation are actually winning races we enter, very upsetting!
Firstly you have to accept that you was never really that good anyway (in my case anyway), I was lucky enough to break 50 seconds in the 400m in my first year as an athlete way back in 2000, in 2001 starting the season winning the county champs in 48.6 I believed I would go on to get faster and maybe achieve something….that time still stands to this day as my PB!
So then it happens, its here, I am old! But as most people my age I refuse to accept aging gracefully, I don’t have a family yet that has tied me down or changed my lifestyle, heck I’m still playing in a band gigging around and pretending I’m a rock star of some sorts. But, what this has given me is the fortitude to not accept that just because I’m older that I’m going to lose the race and in the year as I approached this new boundary of competition I found my self with a new vigour for training and developing myself. A new Belief in myself!
With a new target of ‘Masters Competition’ I realised I can be competitive maybe even on a global stage, because, throughout my athletic career I have stayed healthy, strong and little quick (though needs to be developed again) and although I haven’t broke that 50 second target again for a few years, last year I managed a time of 50.46 to win the British M35 400 title.
In October I went to the World Masters Athletics Championships in Perth (www.perth2016.com) to compete in the 200 and 400, made the quick decision not to do the 200 due to an injury I had picked up in the week after the national champs. Unfortunately, the champs was a mixed bag of emotions as I wasn’t able to better my time and I was DQ’d from the final…the FINAL (I made the final and that in itself is an achievement) and then went on to win Double Gold by winning both relays.
The other 3 members were Lawrence Baird, Rick Beardsell and TJ Ossai, the 4 of us ran both relays and I went on first leg for both (I will attach videos below if can get hold of them). 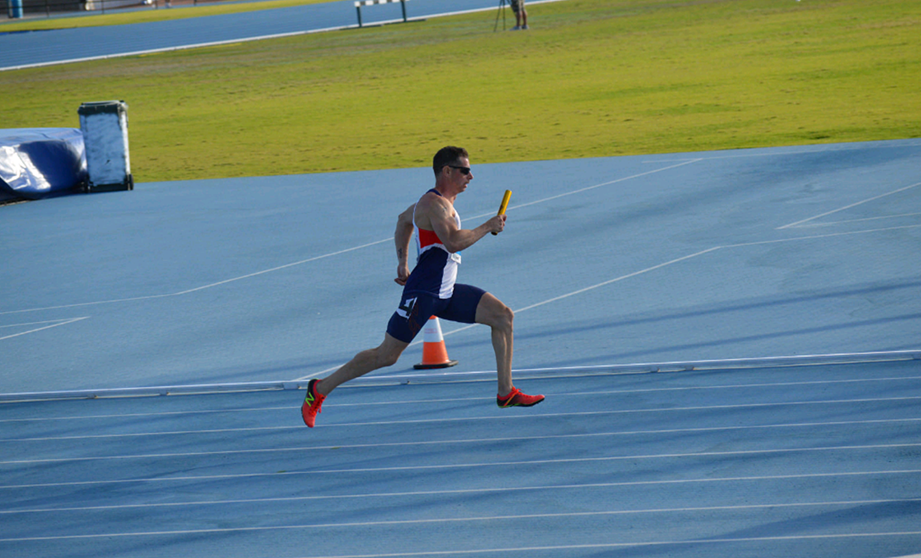 The thing I gained from this event was how much I truly love athletics and no mater my age, no matter how much I will obviously slow down, I will not and can not stop training or competing and for as long as I can I will try and show the youngsters in the midland league that if I am in the race… I AM IN THE RACE!