Skip to content
Master-Athlete.Com
Home » Blog » Usain Bolt, Nitro Series….Hmmm
Not really a specific Masters blog, however, the future of athletics is for the old and the young!
Controversial , me? … Never!
So, it’s over a week now since the Usain Bolt Nitro Series has finished. Unfortunately, I was sceptical before it even happened and… well… my thoughts were not changed.
For something that was being hailed as a saviour and the future of athletics, why was it given such a poor platform? And I mean platform in nearly every sense, stadiums, crowds, participants and commentary. I’m not saying I could have arranged a better show or that I have the answers but this really wasn’t it. 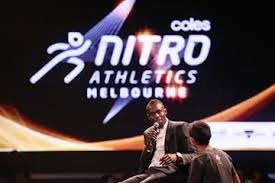 And let me explain…
For a few years now I have been the guy in the crowd cheering on the opposition to Bolt, predominantly this has been Gatlin in those recent years (Though I am of the opinion that drugs cheats should be banned for life, I adhere to the current rules and therefore he is able to compete) not because I prefer Gatlin or because I hate Bolt but purely in that as Much as Bolt has been hailed as the saviour of athletics ever since 2008, it is clear the sport relies way too much on him! Way too much!! And having some one to challenge him in competition and media coverage is a good thing, as its clear he will not be around much longer and then what? Who takes the crown in the eyes of the public? The media?
We have had the ‘Bolt Countdown clock’ wherever he races and the elaborate entrances to compete with any Boxer entering the ring. And I think it’s been this fact that has made event organisers lazy and in this case made the ‘Nitro Series’ fail. It is clear we were being told it was a sell out at these events and yet the camera says different (and these venues were not big!) the series relied on the fact that Bolt has worldwide appeal to draw the observers in but at least locally to where it was being held it didn’t appear to work. What were the international viewing figures from television? I don’t know but from the forums I visit no one really seemed to care.
Maybe for those that don’t really watch athletics this format may appeal but it’s a format that isn’t repeated in club athletics around the world and therefore may give a false impression.
As a masters athlete of course I compete in very traditional formatted events and have done throughout it so maybe I’m just getting stuck in my ways as I age, who knows.
I don’t particularly hate the format of integrated events between the sexes in fact I think the mixed relays was by far the highlights. But I just can’t get away from it just being just a media hype for Bolt. Without that media circus that follows bolt, would this have even happened? Will it happen again? Only time will tell.