The physiological concept of anaerobic speed reserve (ASR) is a relatively new concept to middle distance running.  ASR is defined as the difference between an athlete’s absolute maximum velocity and their maximum aerobic speed (vVO2 max).

The anaerobic/aerobic energy system contribution percentages for a sprint event of 400 meters or shorter is much different from an endurance event of 800 meters or longer. The difference largely determines the success a specialised athlete may have at various events above or below the lactate threshold (LT).  The importance behind the ASR model is simply that faster top-end velocity precedes faster sub-maximal aerobic speed.

Elite sprinters achieve racing speeds that are twice as fast as elite milers, but elite marathoners race only moderately slower than milers (Figure 1).  The disparity lies in the metabolic power available from the anaerobic sources in these faster athletes.  Knowledge of the top-end velocity and the maximum aerobic speed can thus aid in predicting and analysing performance at any event duration between three seconds and four minutes with the use of the ASR model. 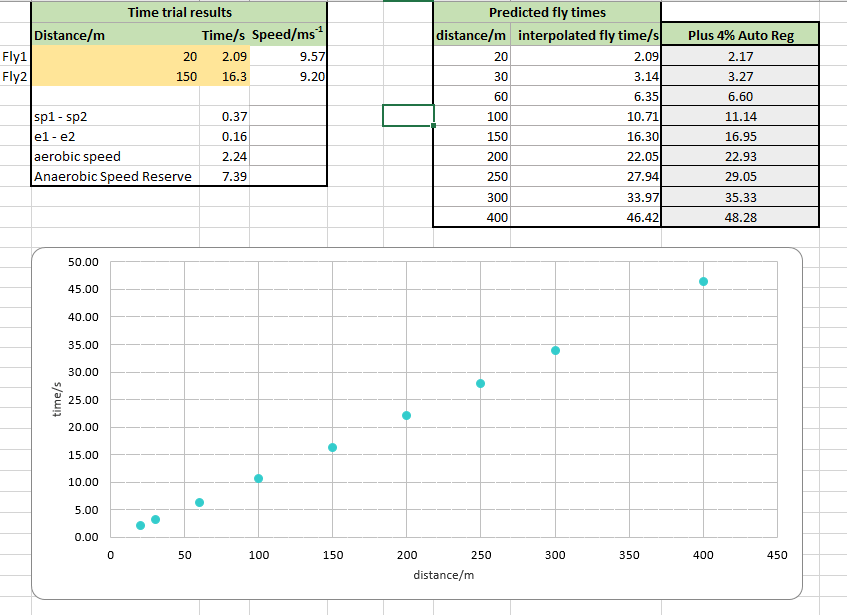 Speed is the name of the game in just about every aspect of athletics and this includes middle distance and distance running.  Many endurance coaches spend far too much training effort extending the workout distance by which a middle distance athlete can comfortably run at the expense of how fast the runner is at absolute maximum velocity.  Middle distance events do have a higher aerobic energy system contribution than anaerobic energy contribution, but there has to be a balance of training that addresses both physiological domains.

The ASR training model stresses the importance of improving absolute maximum velocity in improving the overall performance of middle distance racing efforts.  Put simply, the research suggests that if maximum 30 meter time measurably improves, then performance will predictably improve in both the 800 meters and 1500 meters.  Many studies suggest that improvement in 30 meter time actually extends all the way out to predictable 10 kilometer time improvement as well.

The most effective way of improving absolute maximum velocity is to do work sessions of both alactic 30 meter fly work and speed endurance work that is slightly longer.

Work sessions of 30 meter flys done on the track should include enough of both volume and recovery time to stimulate adaptation in a middle distance runner.  Eight to ten fly repeats, with three to four minutes between, should be good enough.  It is important to have this vast amount of recovery time to ensure that the workout stays alactic in nature.  (Fly work simply means to have both an acceleration and deceleration zone so that 30 meters is done at maximum velocity.)

Speed endurance sessions are near maximal work done between 60-150 meters in length. A workout of five times 100 meters with five to six minutes recovery time between should be sufficient.  Doing these on the fly is not necessary, but timing them is.  These are not strides done at the end of practice.  This is very fast work done at the start of practice after a sufficient warm-up.

The ASR training model predicts that as maximum absolute speed improves in a measurable way (meters/second), then sub-maximal speed will improve at nearly the same corresponding percentage (Figure 2).

Instead of giving you instructions of how to make your own, I have provided a copy for you to take and use.