The question of how to maximise ‘health span’ – the period of life during which we are generally healthy and free from serious disease – is increasingly prevalent both in and out of sport.

Global average lifespan doubled during the 20th Century, and this trend continues. Someone who is 50 today could expect to live until they are 83. A baby born in 2007 in the US, UK, Japan, Italy, Germany, France or Canada has a 50% chance of living until they are over 100.

It’s likely that we will live and work for more years than any generation before us. For many, this will be a necessity as much as a choice, as the increasing social costs of an ageing population are pushing back retirement age in many countries. These changes will have significant economic, social and psychological impacts, but one of the key questions we need to ask concerns the kind of life we’re hoping for, over this time course.

Different parts of our body and brain mature at different rates, so it’s very difficult to say what human ‘peak age’ might be. However, it’s clear that the first phase of life is dominated by growth, while declines become more apparent in the second half.

Many of us assume that the ageing process is a fixed process, that we reach our peak then begin an irreversible decline. This hasn’t stopped an entire industry from trying to make an impact, though.

The global market for anti-aging products, technologies and services is expected to grow from $282 billion in 2015, to $331 billion in 2020.

It seems that many of us would prefer to ‘die young as late as possible’, but while we’re living longer, we’re living ‘sicker’.

Sport as a laboratory

Studying ageing is a challenge, because as we get older, the number of confounding factors in observational research increases. The longer we live, the more choices we make, the wider variety of environments, stimuli and stresses we are exposed to. This can distort results, making it difficult to discern the difference between natural declines in health and performance from deteriorations that occur as a result of lifestyle factors and poor choices.

In contrast, the world of sport represents a fascinating ‘laboratory’ for studying human potential in the absence of sedentary behaviour. In athletic competition, cardiovascular, respiratory, neuromuscular as well as cognitive systems must all work well individually, and as a system, making it one of the best testing grounds for how our body and brain should work together at their best.

Physical inactivity is a primary cause of many of the chronic ailments which afflict an ageing population, but the high levels of physical activity among masters athletes mean that they should be free from many of the negative effects of sedentary behaviour. Any declines in athletic performance mirror the changes in the body and mind that occur as we age, rather than being a result of inactivity or other intervening lifestyle factors.

The performance of masters athletes can provide us with a biological model to understand what healthy, optimum aging looks like.

The performance changes in masters sporting events display a ‘curvilenear,’ rather than linear, pattern. Instead of reaching a peak in their 30s, before experiencing an inexorable and linear decline, masters athletes retain close-to-peak performance for much longer, experiencing a gentler decline, followed by a rapid drop-off in the latter part of life. 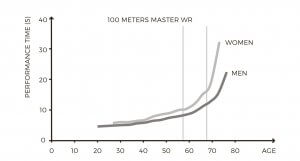 The findings among masters athletes reflect the aim that many of us have: maximise ‘healthspan’ by reaching a peak, then maintaining our health, physical and cognitive capacities for as long as we can, compressing ill health into as short a period as possible. 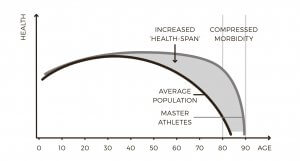 If you’re younger than 35, there is still time to maximise ‘peak’ health and fitness. Ideally, you should aim to start from as high a point as possible, before the influence of ‘decay’ becomes more pronounced. However, if you’re older than 35, significant improvements are still possible.

It’s never too late to change your trajectory for the better. Studies have demonstrated that even 90 year-olds can improve their strength and power, with the appropriate training regimen and significant benefits are possible from relatively small ‘doses’ of physical activity. 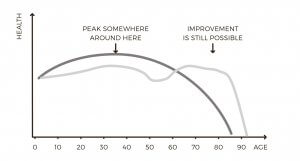 Physical activity sets off a cascade of ‘signals’ which, if repeated, improve the function of our body and brain, diminishing the risk of cardiovascular disease and metabolic disorders, reducing anxiety and enhancing concentration and attention.

Physical activity levels in our leisure time have remained relatively constant over the past few decades. However, sedentary activities at home, such as watching TV or consuming other media, coupled with technological advances in the workplace, mean that we spend a lot more time sitting over the course of an average week than we used to.

As our weekly minutes of physical activity decreases, risk of premature death significantly increases. There seems to be a dose-response association between total sitting time and the risk of dying from anything. In contrast, simply moving more, and moving more regularly, has a powerful influence on reducing the risk of disease, death and improving quality of life.

Does regular exercise let us get away with slumping at our desks?

The benefits of regular exercise are widely known, but even for physically active knowledge workers, morning exercise regimens are typically followed by extended periods of sedentary time, in the office, during commutes and at home. Unfortunately, it appears that we can’t ‘out-exercise’ our desk-jockey lifestyles.

In 2009, researchers studied 17,013 people aged between 18-90 years old. They found a dose-response relationship between sitting time and dying from anything. More significantly, they also found that this risk was independent of overall physical activity levels. It doesn’t matter how active you are. If you sit down for long periods, you are increasing your risk for chronic disease.

These findings have been supported by a number of other studies. Those of us sitting for 11 hours or more, per day, are at the greatest risk, regardless of how much physical activity we do.

Sitting for six hours per day, versus three hours, significantly elevates our risk of death, especially from cardiovascular disease, in both men and women.

Many physical activity programmes fail because their goals are too ambitious. The key is to start doing something. Don’t let perfection be the enemy of ‘good enough’. The following four actions may provide you with some ideas about where to begin. (It’s recommended to consult a medical professional before starting a new exercise programme.)

1) Move more. Take a moment and consider how long you spend sitting each day. Simply moving more, and moving more regularly throughout the day, even if you have to set an alarm to remind yourself to stand up and walk around now and again, can have a powerful influence on reducing the risk of disease, death and improving quality of life.

2) Move slow. Aiming to accumulate 10,000 steps each day has become a common means to increase daily physical activity. While some studies have not been supportive, many have demonstrated that increasing step count, and trying to integrate additional steps into your day to reach the 10,000 target, can be beneficial in terms of increasing physical activity and health.

3) Move fast. High Intensity Interval Training (HIIT) involves repeated bouts of high-intensity effort, followed by varied recovery times. A typical HIIT session could last between 20 and 60 minutes, but even shorter sessions have been demonstrated to be beneficial. A 2012 study among healthy, but sedentary men and women, demonstrated that 10-minute high-intensity cycling sessions, repeated three times per week for six weeks, improved health and fitness markers, including a 28% increase in insulin sensitivity and 12-15% improvement in VO2 max.

4) Move heavy. After turning 50, muscle mass begins to decrease at a rate of 1-2% per year, and muscle strength declines at 1.5–5% per year. Having more functional muscle may be associated with a ‘whole-body neuro-protective effect’ and while more research is required, muscular strength appears to play an important and independent role in the prevention of cardiovascular heart disease. Being in the top 25% of muscle mass for your age-group appears to be a significant positive predictor of longevity. Peak muscle power is an important predictor of how well we’ll function in old-age. Try to include resistance training as part of your life, at least two-times per week. This could involve completing 8-12 repetitions, of 8-10 different exercises, that target all major muscle groups.