So lets talk Fascia and Tensegrity, Now I don’t want to cast any aspersions on any childhood songs in particular (cough, cough), but we do tend to simply imagine the body as a rigid frame, For long, we have attempted to understand the functioning of the human body using dissection. And as such the Human body was divided and segmented into bones, muscles, organs, etc.,  this vision of our body led to us dividing movement patterns in order to improve each part of its function, instead of work on the improvement of movement as a whole eg: the biceps pull on the Radius bone to produce elbow flexion. While this is not technically incorrect, is it the most authentic way to view functional (and therefore dysfunctional) structure and movement?

If we were robots not people, then I think it would be fine. In that case, addressing any pain or dysfunction would be more a case of finding the part that wasn’t working and fixing the hydraulics at that particular joint.

The body is a TENSEGRITY structure

The term “tensegrity” was coined by architect Fuller in 1955.

Tensegrity (ie: tension + integrity) is an architectural concept “based on the use of isolated components in compression inside a net of continuous tension, in such a way that the compressed members (struts) do not touch each other and the prestressed tensioned members (cables) delineate the system spatially.” (Wikipedia)

Cellular Tensegrity hypothesis was originally proposed by Donald Ingber, for which the human body is presented as a Tensegrity structure where 206 bones work in compression, “hoisted” in the gravity field by the tensility expressed in muscles, tendons and ligaments. This regulated tensility level selfstress the human body.

Each body posture we place ourselves in corresponds to a different state of self-stress, itself then corresponding to a distribution (qualitative and quantitative) of muscle tone. The main advantage of a tensegrity structure is its capacity to withstand the stresses applied to it while being absolutely energy efficient.  Without this Tensegrity we are left with the previously discussed Rods and levers belief which Stephen M Levin in his research points out some consequences on the virtual organisation from the application of these thoughts to the human body:

“The forces calculated for a grandfather raises his little 3 years old son will invariably dislocate his spine . Catching a fish by means of a fishing rod would cause a rupture of the body of a fisherman from one arm to the other. Each step becomes an opportunity to crush the sesamoid bones of the foot. Calculations shows that the spine would bow permanently under the sheer weight of the head … “.

Indeed, the glory of a Tensegrity structure, is because of the total interdependence of components, each external constraint (in compression or tension) is transmitted to the whole structure. This process excludes the intervention of the lever arm or fulcrum. Thus, the application of a large force extremely local, does not threaten the integrity of the affected area due to the instantaneous redistribution of stress throughout the system via the network tensility. In a tensegrity system, applying a local stress corresponds to a law of nonlinearity. This principle explains in part the mismatch observed between the levels of stress “theoretically tolerable” in Newtonian theory and stress levels actually supported by certain joints. 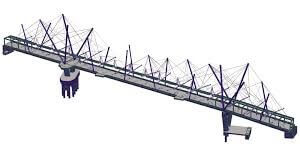 Kurilpa Bridge was the 1st pedestrian bridge built entirely using a Tensegrity modal, bridging the brisbane River is owned by the Queensland State Government with project delivery managed by the Department of Public Works.

The bridge was completed in September and opened to pedestrians in October 2009.

In other terms, if we now look at the work of Myers, in his bestselling book “Anatomy Trains”, Tensegrity describes a structural fascia relationship principle in which structural shape is guaranteed by the finitely closed, comprehensively continuous, tensional behaviors of the system and not by the discontinuous and exclusively local compressional member behaviors. Our myofasciae provide a continuous network of restricting but adjustable tension around the individual bones and cartilage as well as the incompressible fluid balloons of organs and muscles, which push out against this restricting tensile membrane. This is where we come across the term, Myofascial meridian lines. 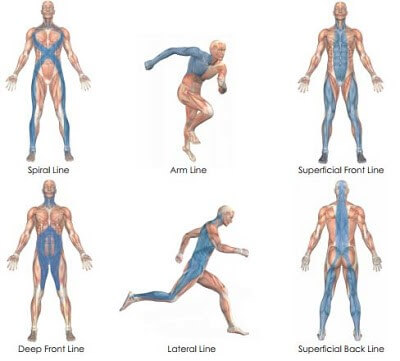 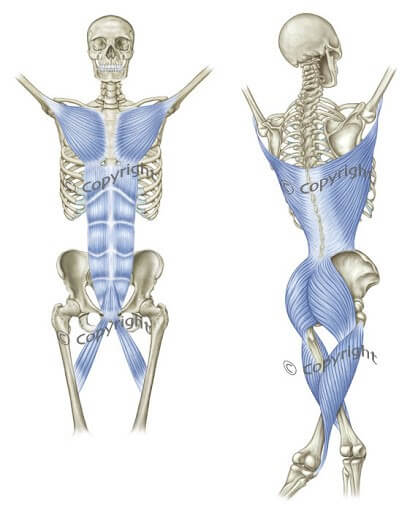 I would suggest the inclusion of “Fascia Tensegrity Training” for improving power and movements efficiency in any sports programme. In the respect of a Tensegrity based approach of training, strength and rehabilitation programs should be based on the following four fundamental rules for more efficient movement, better performance and improved health:

We also then can add the use of creating tension through additional exercises such as the plank, the Ab roll out exercise and loaded Hip Hike (lock) carry to create variations lof tension through the meridian lines with various load and complexity. 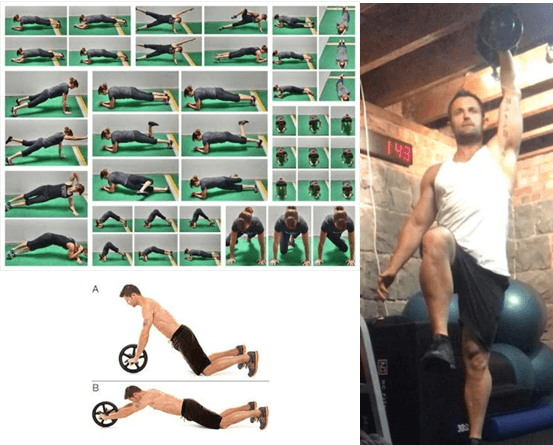 And more dynamic movements such as my personal favourites:

Transfer of training. Obviously there are many ways to link the gym strength we acquire across to the ability to apply more force during sprinting with the right coordination. One variable that can be used in training programs is the specificity of the exercises. Specificity is the idea that the adaptations that come from exercise are very closely related to the mode, frequency, and duration of the stress or stimuli put on the body. Frans Bosch in his book, strength training and coordination, laid out five categories of specificity. -Similarity in inner structure (muscle action and cooperation) -Similarity in outer structure (joint movement) -Similarity in energy production -Similarity in sensory patterns -Similarity in intention Extending through triple extension on the support leg and flexing with the swing leg into a high post position, creating tension through the ankle and torso creating an increased level of tension and postural stability. This should in theory increase an awareness of this power position and transfer to sprinting. Both high post wall hit and standing long jump have good transfer to sprinting #athlete #athletics #trackandfield #tracknation #trackfamily #jumping #instafit #fitness #runnersofinstagram #running #gym #mastersathletics #road2wma20 #mondaymotivation

In addition to the above mentioned elements that help improve the general nature of Fascia and therefore Tensegrity it is worth looking into the world of Muscle Slack, a term popularised by Frans Bosch for the purpose of improving the body’s ability to co-contract and create pretension (this itself is Fascia Tensegrity).

Imagine a rope that is loose versus a rope that is tight before you want to walk across it. The time it takes for the rope to tense to have enough force for you to put weight on it is time lost in athletics.  The degree to which a muscle’s operative tension must be increased in order to become taut is known as muscle slack.  Bosch says the speed at which muscles can build up their tension and overcome muscle slack is usually more important to performance than the amount of force they can eventually produce. This is why technique and timing is so important in athletics.

In sports, Bosch argues that the best athletes make smaller counter-movement’s and allow storage of elastic energy to work.  He then argues that training based on large counter-movement’s will lead to longer muscle slack and poorer performance. Athletes who require the use of large counter movements when performing running or jumping activities are trying to take the slack out of their system.  An athlete with a lot of muscle slack is not springy and takes a too much time to generate force.  Plyometric exercises that involve a rebound like a depth jump, absorption exercises to teach the muscles to co-contract and develop tension quickly like depth drops, and isometric exercises like the video below help eliminate muscle slack in the athlete and increase the use and functionality of our Fascia Tensegrity modal.

Now to further discuss the thoughts of Bosch, let’s consider a block exit for sprinters, as an athlete positions themselves into “Set” at the command of the starter, their actions in doing so will directly affect the outcome once the gun goes!

We have all seen those athletes that seem to be left in the blocks, or appear to have poor reaction time. Well actually their “reaction” is likely to be the same (that is their synapse reaction) but what is lagging is this muscle slack and use of optimum tensegrity to create pretension in the body to elicit faster excitation and force out of the blocks into their acceleration.

By considering the Fascia Tensegrity modal an athlete should engage their system to create a bridge through their body from their hands and through to the feet in the pedals, this pretension has now set the body up for maximum power and propulsion.