Skip to content
Master-Athlete.Com
Home » News » At 70 years old, Chico’s Roger Parnell has no plans of slowing down

His warmup routine was simple — stretch first, then take the track for practice at University Stadium.

Now at 70 years old, Parnell finds himself in the same routine.

Twice a week, he trains at University Stadium and often he would see current Chico State track and field athletes practicing.

“The young people who are out t 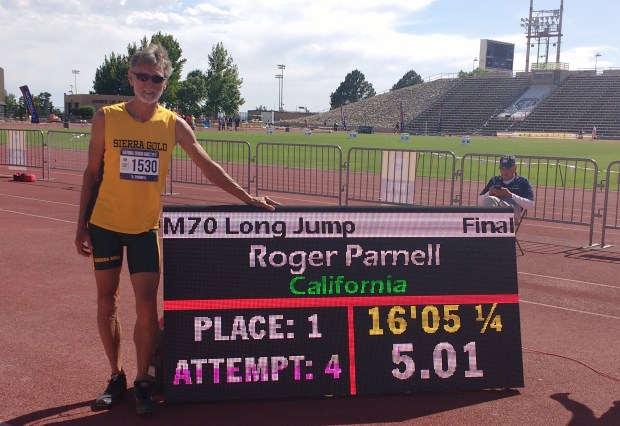 here working so hard, it brings back memories,” Parnell said. “They inspire me.”

Parnell’s hard work has allowed him to compete in several different track meets from the National Senior Games to the USA Track and Field Masters Championships.

His most recent accomplishment was taking first place in the long jump at the National Senior Games in Albuquerque, New Mexico, back in June. His leap of 16 feet, 5 and 1/4 inches set a new National Senior Games record for the men’s ages 70-74 division. The record was formerly 16 feet and was set by Melvin Larsen in 1995.

Being active isn’t anything new for Parnell. He’s been competing in track and field since he was a teenager growing up in Danville.

“I’ve been a fast kid all my life,” Parnell said. “I can remember being that kid on the block who didn’t lose a race.”

His primary event was, and still is, the long jump, but he’s also competed in the 100-meter dash, the 200 and hurdles. He took up the dash events so it would help him become a better jumper.

“You have to have the speed in order to be a good long jumper,” Parnell said. “They complement each other extremely well.”

After Parnell graduated from Chico State with a business administration degree in 1973, his track and field career went dormant for about 20 years.

He would go to graduate school, start a family and end up working as a school psychologist in Lassen County for 16 years.

It wasn’t until his mid-40s when he encountered a rough patch in his life.

A sudden divorce led him back to a familiar place — the track.

“I really needed a physical outlet,” Parnell said. “I could go to the track and run hard and get all of that bad energy out. It was extremely therapeutic.”

As Parnell revisited running, he crossed paths with Walter Dahlin, a former conductor for the Chico State Symphony, the Paradise Symphony and an avid competitor in Masters track meets. Masters meets are competition for athletes who are 35 and older.

“I saw him running on the track and thought, ‘Wow, that guy’s got good form,’” Parnell recalled. “He told me ‘you can get involved with a low-level meet and have some fun.’”

Parnell took Dahlin’s advice and immediately entered a meet in Los Gatos. From there, he was hooked and followed that meet with the Masters National Championships in Eugene, Oregon. He took second in the long jump at 45 years old.

Now Parnell travels around the nation competing and succeeding at different meets. He has a fairly strict workout regime he follows in order to maintain a healthy lifestyle.

“This forces you to have a healthier lifestyle as you get older,” he said. 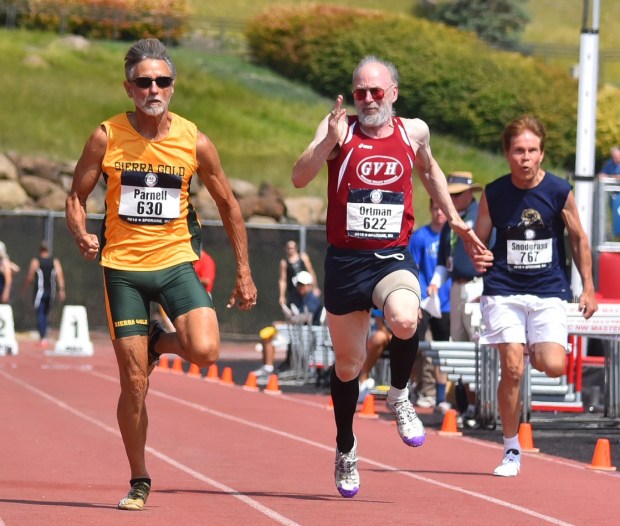 He runs no more than two days in a row and on his day off from the track, he goes to the gym, where he’ll lift weights for two hours.

His second wife, Kris, is his “number one cheerleader” and helps him maintain a healthy diet.

“She’s a very health-oriented person. I have no problems following a healthy diet because that’s what she’s doing,” Parnell said. “I bask in her sunlight.”

But Parnell is very careful about not overexerting and preventing injuries.

He’s dealt with two major injuries that caused setbacks. About 10 years ago, he broke his left foot. Since then, his left foot is now equipped with metal rods.

“I couldn’t have screws or pins,” Parnell said. “I wanted to run again.”

It took him about a year and a half to recover and get back into training.

But then, five years ago as he was living in Susanville, a brutal wind storm toppled a tree into his home. As he was attempting to tarp the damaged roof, he fell, breaking his arm in two places and breaking a joint in his right foot.

“It was about a 50-50 chance I could be running again,” Parnell said. “That was a challenge for me. I’m going to beat the odds.”

Parnell went to physical therapy and rehabbed from the injury. It was a slow process that took plenty of patience, but after three years, Parnell was able to recover and run again.

Occasionally, he still feels pain and aches, especially in his right foot, but he’s learned his body’s limits.

“You got to learn to read your body,” Parnell said. “If I feel a twinge, you can’t run through it like when I was younger. Now you stop and say ‘now’s a good time to go home.’”

Parnell has a trophy case, gifted to him by Dahlin, that’s loaded with medals and accolades he’s collected over the years, but he’s still aiming to break the world record long jump of 17 feet for his age group.

Also on his bucket list is the indoor pentathlon, which includes the long jump, high jump, hurdles, shot put and the 1,000-meter run.