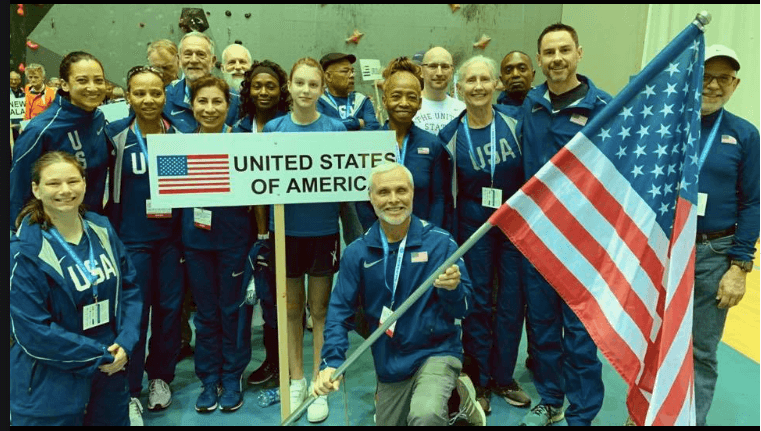 WMA championships are held every two years for athletes over the age of 35 years and are comprised of track and field events with various age groups. In 1965 the USA Master Track and Field team was formed, and international veteran track and field meets followed.

Booth, a former high school pole vaulter and collegiate track and field athlete at Eastern Michigan, had been a distance runner for many years before rediscovering track and field events for seniors. He has competed locally, regionally, and nationally since discovering the Michigan Senior Olympics and the WMA, 14 years ago, nearly four decades after his collegiate career.

This year Booth went to Toruń, Poland for the WMA Indoor Championships from Mar. 24-30 and won a gold medal in the pole vault, the third of his career. He was one of around 200 Team USA athletes to compete and the only male pole vaulter out of the 11 age divisions to earn a gold medal. 84 countries were represented, and a record number of around 4,400 Masters Track and Field athletes competed.

Team USA placed second to Germany in the gold medal rankings and set 10 age group world records while in Poland.

In ten years, Booth has represented Team USA at six of the last world WMA championships, winning three gold medals in the pole vault in addition to medaling in other events.

Booth finished ninth in the men’s pole vault last year in Spain. Pole vaulting was Booth’s favorite event and his bread and butter, he knew he could do better.

Upon return and in preparation for the WMA Indoor Championships, in addition to competing at events in the US and getting healthier from a shoulder injury suffered in Spain, Booth also arranged to have his own poles transported overseas, something he didn’t do in 2018.

Booth worked from home with a runway and bars he built in his backyard in Dexter Township and when the weather got bad, he and his pole-vaulting club went over to Eastern one night a week.

This year, Booth had the opportunity to carry the American flag and lead Team USA in the parade of athletes during the opening ceremony. He told The Sun Times he was feeling good about his chances to medal in the pole vault. He was seeded third but had done better during practice runs than the top ranked pole vaulter in the world.

Booth was scheduled to hurdle, long jump, run the 400, pole vault, and run on a relay team, but something went awry during his first event.

“With the long jump the first event up, I injured my hamstring,” said Booth. “And thought, ‘ok I’m going to have to go back and tell everyone it was just a sight-seeing trip.’

Booth hadn’t had to use the medical staff of Team USA in the last two or three years but this time he needed it.

“Electrical stimulation, ice, cold, massages, physio tape,” said Booth. “They did the whole show to get me well enough back so I could run down the runway to make enough bars to win (the pole vault).

As a result of his injury, Booth didn’t run in the hurdles but after success with running relays in Spain he wanted to try. He wasn’t even sure if he could do it, but the age group below pulled a runner from the men’s 70-year-old team to run with the men’s 65-year-old team because they had a chance to win gold and set a world record, which they did.

Booth ran the first leg without exploding out of the blocks and didn’t have to pull up early. Despite not winning he needed to run that relay so the other runner could run with the other age group.

So how did this gold medal for pole vaulting compare to the other two he’s won?

“In a way it was the best because it was redemption,” said Booth. ”I was aiming at something better than what I knew I could do under the right conditions in Malaga and I was working really hard for it and was in good condition until the injury. I was very confident that I would b in the medals if it all went right.”

Now, it’s on to preparing for the next WMA championships which will be held in 2020 in Toronto. Booth and his wife, Luanne, who also began competing shortly after Booth did to get involved, will be competing at the National Senior Games of America in June. Luanne qualified for four sprint events while Booth qualified for five total events.

After all this time competing, Booth said success was a factor but also said it was just fun.

“I go into a workout like I got a new book to read or something like that, it’s totally enjoyable,” said Booth. “The attitude is ‘I want to see if I can’t keep it going and getting better at bits and pieces.’ Vaulting is such a complex thing. It is so challenging and interesting. I’m having a lot of fun traveling and getting little gold medals. Very small but hard to get. It’s rewarding to do something well, one of those quality of life things.”