Osland, a former Olympic 800m runner and current CEO of Athletics Ontario, was modest after the performance, saying that he doubts their record will last long before someone else lowers it.

“We’re looking at another guy to help beat it,” he says. Osland had raced with Faucher before, and he trains with Rayner on the University of Toronto Track Club (UTTC), but before Sunday, all four of them had never run together. In fact, Fuentes wasn’t even planning to run the 4x400m on Sunday. Osland, Rayner and Faucher needed a fourth runner, and when they saw Fuentes win the M55 1,500m (he ran a 4:32.98), they approached him and asked if he’d join their team.

“We just said, ‘We’ll find someone on the day,’” Osland said. “That’s how masters is—who can you find standing around to join you?”

At this summer’s World Masters Athletics Championships in Toronto, Osland, Rayner and Faucher plan to team up once again, adding another UTTC masters athlete and former Olympian, Mike Sherar, to their 4x400m relay.

Today was a big day for #WMATO2020, as we formally announced our funding from the Government of Ontario and the @cityoftoronto at the iconic @cntower ! 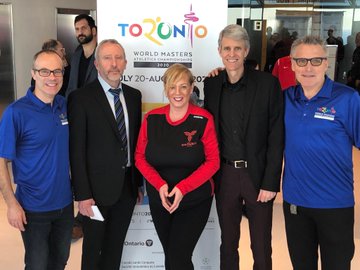 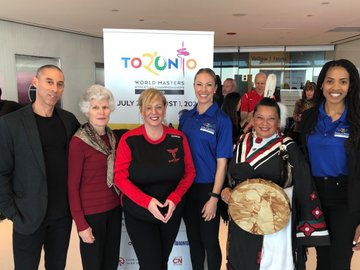 “We should do quite well in that,” Osland says. “If we don’t win, I’d be surprised. At the very least, we should get second.”

Osland, Faucher and Sherar will also race a relay this weekend at the Canadian Masters Indoor Championships in St. John, N.B.