Like many successful athletes, Karla Del Grande, who set her fifth outdoor world age group record last week in the W65 400m, eats a pretty darn healthy diet, but it’s not like she never indulges in the sweet stuff. “My favourite foods are ice cream, popcorn and chocolate,” she laughs, “but there’s got to be moderation, there’s got to be treats. People might think from my breakfast it sounds like maybe I’m too strict, but the rest of the day I can justify a few of those other treats.”

Del Grande certainly starts her day off right. Breakfast is usually her homemade granola with kefir or yogurt, and a banana. “Sometimes instead I’ll have eggs with kale, and most days I also have a protein shake—it’s actually a protein powder that has greens.” She also puts beet crystals in it. (Which definitely justifies treats with lunch and dinner.)

Del Grande’s lunch is usually a salad made with kale, with other vegetables like carrots or zucchini and leftover protein from the previous night–usually steak, salmon or chicken, or sometimes eggs. “I like a bit of crunch, like sunflower seeds or pumpkin seeds, and maybe a bit of feta cheese, or some strawberries. I like to mix it up,” she says. 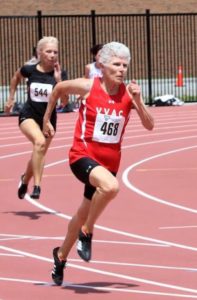 For dinner, Del Grande likes to have a lot of colourful vegetables on her plate, and a little meat (again, either red meat of some kind, or chicken or salmon), with some rice, potato or sweet potato.

The record-setting track runner grew up in Burlington, Ont. with a dad who loved to be active and was always challenging the kids–”‘I’ll race you to the next pole!’ he would say,” she remembers fondly. During her high school years she trained with the Burlington Legion Track Club, and competed through her first year of university before letting it go, staying active with cross-country skiing and aerobics classes but “not much running.” She only came back to running in her late 40s.

“I started doing some road races through a colleague at work,” she recalls. “We went to the Running Room a fair bit, and there were lots of 5Ks, 10Ks and half-marathons. I was doing a speed clinic with them, and I was really enjoying the work on the track (sprints) in preparation for the 5Ks and 10Ks. Most of the other people didn’t enjoy it, but I did. They were complaining about running around the track, and for me it was just like being a kid. Someone said, why don’t you do masters track? I was incredulous–you mean for grownups? So I did a couple of competitions just checking it out, and I met Bruce Mitchell [her former coach], who said he thought I had some potential.

“If you’d like me to train you I’d be happy to do so, he said. He said whatever you put in, I will match. If you just want to give it a casual try, fine, but if you want to be serious and train with me a couple of daysa week, that’s great. I trained with him for 13 years before he retired and moved to Port Dover.”

About this story, Del Grande said, “I hope it inspires others to try masters. There are other masters women. We’re very supportive of each other. We really try, in between workouts, to keep tabs on each other, and ask how are you feeling today? I’m probably the most experienced at competing, so I share what I’ve learned. Sometimes, as with any coach, there’s a bit of pushback, as in, Wait a minute, I’m not 16 any more… When I tell people about my training, they get intimidated, but I worked up to it gradually, and it’s balanced. For example, if Jamal planned three repeats, and two went well, that’s fine. You can easily get injured if you jump into it too quickly, so we try to moderate what we did as kids.”