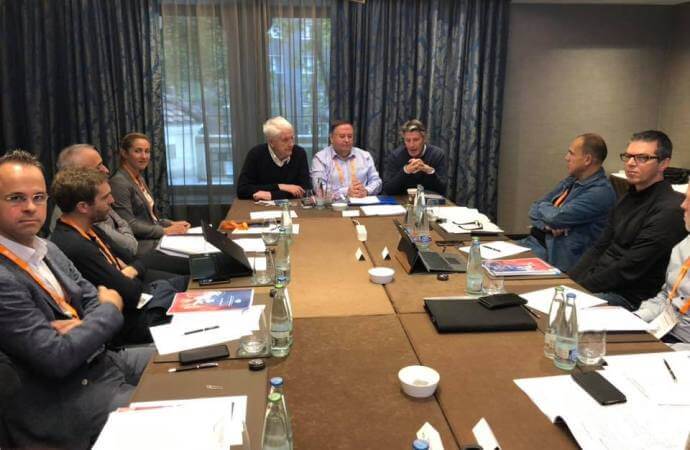 The Gibraltar Athletics Amateur Association has pushed a motion through the Athletics Association of the Small States of Europe (AASSE) calling on member federations to become more proactive against political interference. The motion seeking support for the principle “that politics should not be allowed to interfere in sporting matters and that all member federations of

Great to see the Masters Athletes from Gibraltar having support!

The Gibraltar Athletics Amateur Association has pushed a motion through the Athletics Association of the Small States of Europe (AASSE) calling on member federations to become more proactive against political interference.

The motion seeking support for the principle “that politics should not be allowed to interfere in sporting matters and that all member federations of European Athletics and the IAAF should receive equal treatment at official competitions of these bodies regardless of their geographical location and of any political considerations.”

It was presented by George Garcia, representing the GAAA at the AASSE, and received the universal support of the ten AASSE member federations and was passed unanimously.

The Athletic Association of Small States of Europe (AASSE) is a transnational organization representing the athletic interests of smaller European nations. It comprises European Small States Federation, with a population under one million, who are directly affiliated to the IAAF. At present Andorra, Cyprus, Gibraltar, Iceland, Liechtenstein, Luxembourg, Malta, Monaco, Montenegro and San Marino are represented at the AASSE. GAAA President Frank Carreras presently holds the role of elected President of AASSE.

The motion, presented by Mr Garcia, followed this summer’s incident in which a team of Gibraltarian athletes were imposed restrictions on their participation by World Masters Athletics at the world Championships held in Malaga following Spanish government intervention. The WMA at the time informed the athletes that they could represent Gibraltar and would need to run under the neutral banner of the WMA.

This led to an immediate reaction from the IAAF President who came out in support of the Gibraltar runners and tweeted that he hoped the organisers, who are independent of the IAAF, would not succumb to political pressure and discriminate against them. The WMA failed to heed this call leading to four runners withdrawing and only Liam Byrne opting to race “under protest” and later donning the Gibraltar flag.

The motion passed by the AASSE calls for the European Athletics and IAAF councils to take whatever steps they consider appropriate to obtain the requisite guarantees from any prospective hosts of official competitions, and their governments, to achieve the aims of the motion.

It sought to essentially, recognise that in large sports governing bodies like the EA and IAAF there will always be some member countries and territories that “are suffering from political disputes and disagreements”. This said Mr Garcia was “an unfortunate fact of life and not one, I am sorry to say, that is ever likely to be resolved.”

He further added, “our contention, simply, is that sport and politics should be kept separate. I have attended many EA and IAAF conferences and have heard successive presidents of both the EA and IAAF describe our federations as members of an athletics family. And that is as it should be. Some members of the family are larger and more accomplished than others, but at the end of the day all federations are members of the same family and none should be treated as poor relations.”

“Both the EA and IAAF have been supportive of us when we have been discriminated against in the past but by the time they get involved the discrimination has already happened, and our proper participation at whatever event it might be, has already been compromised. Our motion asks that the EA and IAAF be proactive, as opposed to reactive, on this issue, and that they take whatever action they deem necessary to be able to obtain the requisite guarantees from the organisers of official competitions staged under their auspices, that all their members will receive fair and equal treatment.”

The motion was passed at a meeting held last month in which IAAF President Lord Sebastian Coe had been in attendance earlier along with the President of European Athletics. It is understood the GAAA received the support from Lord Coe in presenting the motion following the WMA incident this summer. Mr Carreras is expected to raise this same matter at the next EA conference which he will be attending next month.

Commenting after Mr Garcia said, “Lord Coe and Arne Hansen the EA President both attended the AASSE meeting to show their support for the small nation members. They were not present for the meeting’s business. Notwithstanding this, Lord Coe mentioned in his address his concern at a growing trend in political interference in some athletics events and his desire to do something about it. He is also aware of the issues our athletes have had and has been fully supportive, even voicing this support in public tweets. Gibraltar athletics is very grateful for this support.”