Hamstring injuries! we have all had them! I personally have had some major ones, including a full Bicep Femoris Tendon Avulsion back in 2010 on my Right leg.  So here we take a look at the hamstrings and how we can help prevent injury but also rehab. Here we have a 10 day programme to get you back running as soon as possible.

I tore my tendon on day 2 of a 14 day war weather training camp, by day 11 I was able to jog 1.5 miles within a further 5 weeks I was actually back to some lower level of sprinting, and that was without the use of a big chunk of hamstring functioning correctly.

What are the hamstrings?

We should probably begin by taking a look at what the hamstrings are. The hamstrings are the muscle group that runs down the back of your thigh. The hamstring muscle group is comprised of three actual muscles; biceps femoris (that has a long head and a short head), semimembranosus, and semitendinosus. The muscles group is bi-articular, which means that it works on two different joints; the hip and the knee. Specifically, the hamstrings work to extend the hip, and also flex the knee. This makes them important in sprinting because they control the lower leg movement throughout most of the stride cycle, and also assist the gluteal muscles in creating a powerful hip extension. The hamstring muscles also have a few other functions. They act as a secondary knee stabiliser and also play a role in controlling rotation of the whole leg (Koulouris et al. 2007). There is some evidence to show that the hamstrings also act as a shock absorber during foot contact in sprinting (Malliaropoulas et al 2012).

During the sprint cycle, as the thigh reaches its maximum flexion angle in front of the body, the lower leg begins to escape forwards. This is crucial, as it allows the athlete to cover greater distance per stride, increasing their stride length. Whilst this lower leg is moving forwards, however, the hamstrings are working hard to control the movement. The hamstrings first slow the lower leg as it moves forward, bringing it to a stop. They do this eccentrically, because the hamstrings are lengthening throughout this movement. Once the lower leg has stopped moving forwards, it is then rapidly accelerated towards the ground. This is achieved mostly through hip extension, which requires the hamstrings to concentrically contract. The more powerful this movement, the shorter the ground contact time, which plays a role in improving stride frequency. Once the foot makes contact with the floor, the hamstrings continue to work in combination with the gluteal muscles, actively pulling the body over the foot (Mann 2011). These actions demonstrate the major contributions of the hamstring muscles during the sprint cycle.

Before we look at these factors in detail, here are two key facts to consider:

Hamstrings operate at the highest velocity (up to 88kph for elite sprinters) of any muscle group. To understand this, think that if you are running at top speed your hamstring contracts as a flexor of the hip and as your leg extends behind you in your stride, your hamstring continues to contract at more than double your top speed as it flexes the knee and recoils the lower leg before the leg starts moving forward again.

What are the implications of the speed of this muscle?
The implications of this is muscles moving at this speed makes the hamstring sensitive to injury if high intensity training is attempted with poor technique or during conditions of incomplete regeneration or overtraining”. (page 40 The Charlie Francis Training System)

The hamstring is one of the largest muscles in the body. When it is tight, overworked and or trained primarily as a flexor of the knee the risk of injury increases. Large amounts of time and energy go into the rehabilitation for an athlete who has a hamstring injury.

HAMSTRINGS: EXTENSORS OF THE HIP FOR SPRINTING

The hamstring has multiple roles as flexors of the knee and extensors of the hip. For Sprinting, coaches and athletes need to focus on the following exercises:

Easy to perform non-strength exercises that facilitate hamstring development should also be done. These are:

TWO COMMON MISTAKES IN HOW THE HAMSTRING IS TRAINED FOR SPRINTING

Injuries and Injury Prevention in Sprinting and Hurdle Events

A hamstring might be strong and it might also look big and beautiful. For the hamstring to be healthy for sprinting ROUTINE regeneration done in small amounts often is most effective.

A common mistake made by coaches and athletes is avoiding therapy all together because they think it’s not needed, the thought that it is expensive or they don’t understand the importance.

Wearing layers of clothing to keep all of you muscles dry and warm helps speed up the process of getting appropriately warmed up to do the highest quality of work as well as the highest intensity of work.

Work to improve your method of warming up which should include routine exercises performed daily all year around including competition. (See my blog on the warm-up)

Heat can be added to hamstrings and or tighter muscles to assist in the process of getting your muscles in the best possible state for training.

Heat can be put on any muscles, wrapped in saran and then loose tensors overnight for best results.

EMS can be used to both strengthen hamstrings and relax or massage the hamstrings. The usefulness as well as the effectiveness of this small device is invaluable.

Worth also noting the role of the Neck muscles in Hamstring health, take a look HERE

Going against the grain of the movement toward “functional” exercise, the structural damage of individual muscles is targeted using eccentric contractions. Eccentric hamstring exercises performed with the muscle in a stretched position are used to lengthen the shortened muscle fascicles post HSI. This is crucial to not only reducing HSI recurrence, but also in getting the athlete’s power back.

Eccentric hamstring exercises have been shown to prevent first-time and recurrent HSI. These exercises are a vital part of breaking the cycle of pain, atrophy, weakness and re-injury. The following exercises provide an eccentric contraction of the hamstring in a lengthened position:

Building up tolerance to eccentric loading and resilience to muscle damage is important in preseason and during the season. Of course, in-season muscle soreness and sprinting load need to be managed. 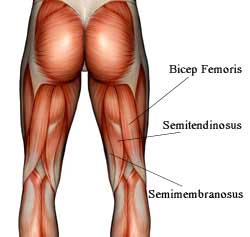 Training After a Hamstring Pull to fully Rehab

Immediately after a hamstring injury, where some muscle fibers are torn or ruptured, an ice compress should be used to stop internal bleeding.

Day 1 – The first day after the injury should be a passive rest. Depending on the level of Injury follow the RICE principle in this phase

Day 2 – The second day’s activity will depend on the extent of the injury, again depending on level follow the RICE principle.

An assessment of the next competition must be made. For the sprinter, it is usually possible within two or three weeks to have a race at 200m. This must be done with a limited 30-40m acceleration and maintenance of speed.

For the 400m runners, a 400m race in 10 to 14 days, with a limited acceleration distance of 30m from the starting blocks is usually possible. A limited acceleration distance means the athlete must be under the maximum speed without the maximum stride length. Under those circumstances, to perform well, the athlete should be in good specialized training condition to maintain the limited speed over the 200 or 400m distance.

On the second day after a hamstring pull, the athlete is able to execute the following workout:

– No extension – jumps or bounding

After 5 – 6 Days: Start to increase the dynamic element and speed to the “Jogging” elements

– All exercises like before plus additional eccentric weighted exercises done easily

Normal training with the speed limitation. From 6-8 days, massage of injured muscle may be started.

After a few possibly good races at 200m the sprinter might compete again in the 100m.

A very interesting paper back in 1989 looked at the use of fast eccentrics as Hamstring Health, I personally also add these in regularly as part of my generic prehab