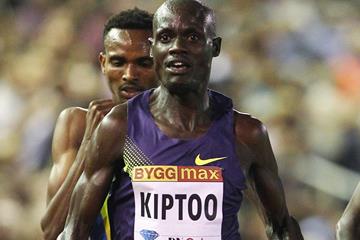 Mark Kiptoo of Kenya set a new master’s world record on Sunday and Meskerem Assefa won and broke the women’s course record in 2:20:36

Mark Kiptoo of Kenya set a new M40 marathon world record in Frankfurt on Sunday in 2:07:50. The 42-year-old runner was formerly a 5,000m specialist on the track. He was the African champion in 2012, won the Stockholm Diamond League race in 2010, and was third at the Commonwealth Games in 2010 over 5,ooo metres. Kiptoo smashed the former record by 48 seconds, finishing sixth overall in the race.

A post shared by Mainova Frankfurt Marathon (@frankfurtmarathon) on Oct 28, 2018 at 2:17am PDT

First place went to 2017 runner-up Kelkile Gezahegn of Ethiopia in 2:06:37. Gezahegn broke away from second-place runner Martin Kosgey of Kenya after the two battled for many kilometres to take the win. Kosgey finished just behind in 2:06:41. Alex Kibet, also of Kenya, was third in his marathon debut, finishing in 2:07:09.

In the women’s results, Meskerem Assefa won and broke the course record in 2:20:36. Haftamnesh Tesfay was second in 2:20:47, and third place went to Bedatu Hirpa in 2:21:32. The top six women were all from Ethiopia.

American Sara Hall was entered in the race, and predicted to run a massive personal best. Hall won the US 10-mile Championships on October 8th and was reportedly hoping for a breakthrough run, but dropped out on Sunday due to a injury in her peroneal tendon. She said in a tweet, “I tweaked my peroneal doing strength training prior, but hadn’t missed any training so I thought it would hold up. Unfortunately the marathon exposes and I wasn’t able to run through it. Thanks to everyone for your support.”

One Reply to “Mark Kiptoo sets world record of 2:07:50 at Frankfurt Marathon”