Flo Filion Meiler is at the University of Vermont’s indoor track and field practice sessions every Monday, Wednesday and Friday. By 9 a.m. sharp, the pole is in her hand and her eyes are laser-focused on the height she needs to clear. She’s the elder among a large group of student-athletes, her moppy silver hair and her enormous smile help her stand out in the crowd. That, along with the fact that she is 84 years old and training alongside college-aged students at daybreak.

Meiler takes her position, breathes in and then exhales. Ready for takeoff, her hands grasp the pole firmly. Her body lifts into the air as the pole makes contact with the ground. Her back arches over the bar and then a split second later, she lands gracefully on the other side, her feet safely planted back on the ground.

“Flo gives me a little bit of a heart attack every time I watch her. I am always like, ‘Please be OK’ under my breath every time she lands a high jump or a pole vault — and she always is,” her coach, Emmaline Berg, 26, said. 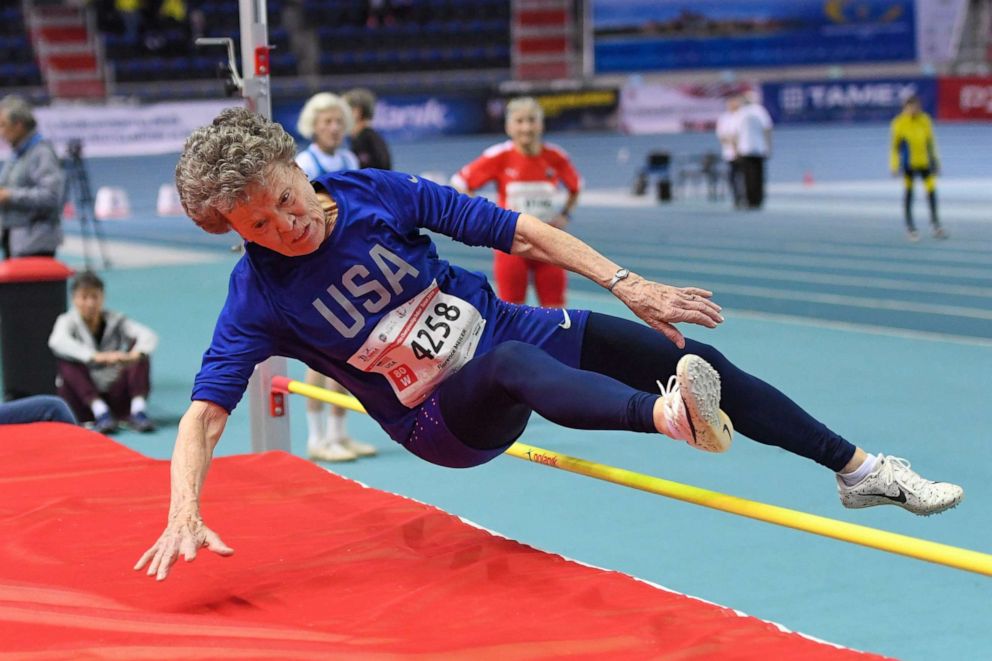 Meiler’s a pro. She has been doing this for 20 years.

She won seven medals in her age division (80-85): gold in the pole vault, relay, pentathlon, high jump and hurdles, and silver in the triple jump and long jump. She also was part of an American women’s team that set an age-division world record with a time of 3 minutes, 18.43 seconds in the 4×200-meter relay (breaking the previous record by over a minute) in March at the World Masters Athletics Championships Indoor.

The annual competition is for athletes over the age of 35. Meiler’s stellar performance came after a 26-hour journey from Vermont to Torun, Poland, that involved three flights, a five-hour bus ride from Warsaw to Torun and the airline losing her luggage. But she forgot all about it when she stepped into the stadium. It overwhelmed Meiler and excited her at the same time. The next day she won Team USA’s first gold medal by winning the high jump.

As a high school student in Champlain, New York, she signed up for everything — basketball, cheerleading, band, choir. And Meiler, who now lives in Shelburne, Vermont, stayed active throughout her adult years. But it was a game of doubles tennis with her husband Eugene that beckoned her to the track.

Her friend Barbara Jordan, now 83, watched Meiler’s quick returns and nimble moves and asked her to try out for the senior track team. Meiler was 60 at the time and figured if not now, when?

“Barb, are you sure? I have never done this before in my life,” Meiler recalled saying to Jordan. “Oh, you’re going to be great at it,” Jordan affirmed. Meiler had been drinking her nutritional supplement shake every morning and taking multivitamins. She figured she’d give it a shot.

Meiler and Jordan trained together from there. They’d call out each other’s mistakes, and they’d watch each other as they did their run-ups to the high jumps and hurdles and helped each other perfect their motions. The women have both competed in the Senior Games every year since 1993 and have pushed each other to be better, winning medals in the process. 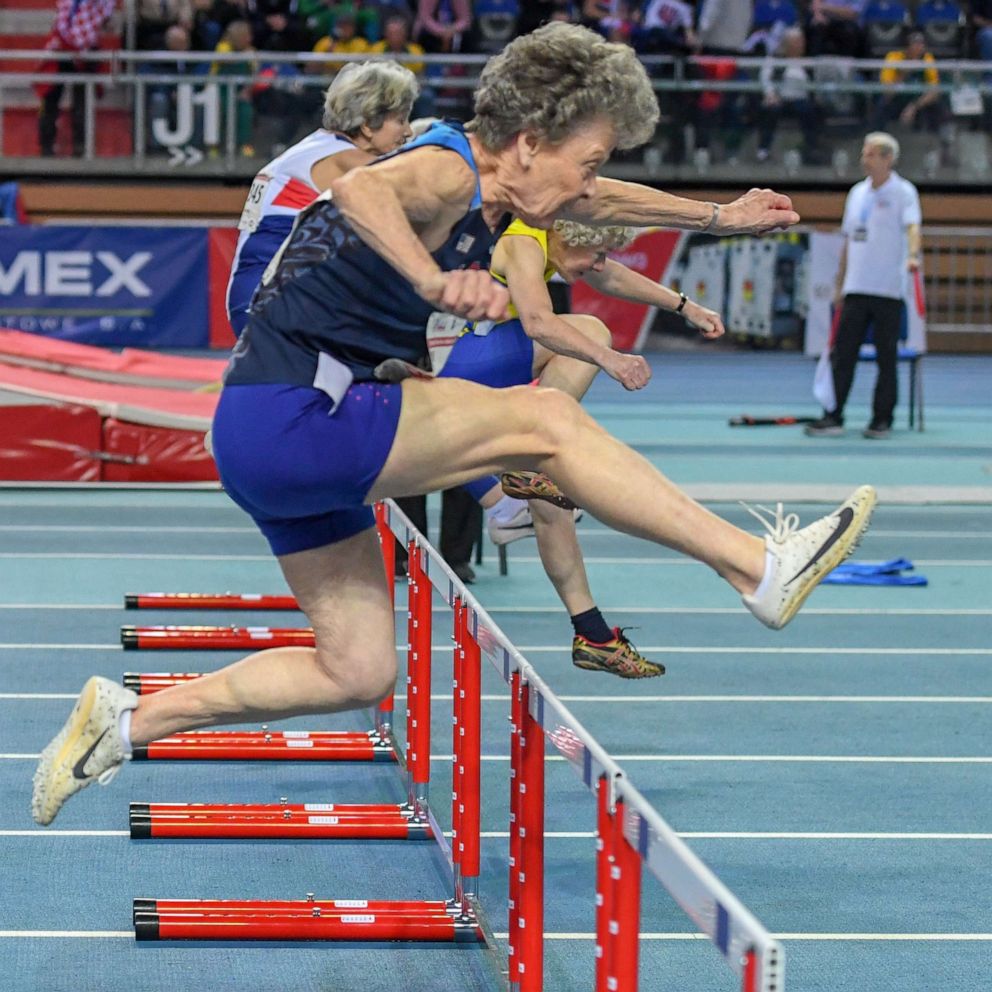 Leading up to the National Senior Games, Meiler is training six days a week to ensure that she’s competitive.

When Meiler was about 65, while at a meet, she watched as athletes competed in pole vault. She watched them jump, and she remembered thinking to herself, “You know what? I think I can do better than that.” And when she went back to practice, she promptly signed up for pole vaulting lessons.

The last time Meiler and Jordan ever competed against each other was at a track meet in Minneapolis in 2015. Jordan was diagnosed with cancer and decided that it was going to be her last meet. Her last event, the 100-meter dash, was the perfect finish she’d hoped for — she beat Meiler by a hundredth of a second — and they both broke the record at the time. They held each other for a while afterward. They’d grown in this game together, and that was their moment to acknowledge it.

“We brought out the best in each other,” Jordan said.

In 2010, Berg was on the track team at Dartmouth. She remembered arriving at practice one day and noticed a swell of people huddled, but she didn’t know why. She then spotted Meiler, 75 at the time, launching herself into the air with a pole. Berg’s eyes bulged, and she stood there stunned for a solid minute before mouthing, “Wow.” A few years later, Berg graduated and took up a coaching job at Vermont just as Meiler was looking for a new adviser after Jordan’s retirement.

“We talk about track and field a lot — [especially] what Flo can do to become a better athlete. Flo brings this energy to practice and you know she’s going to go for it,” Berg said. “She doesn’t care who gets in her way, she’s just going to go for it, and my athletes appreciate that. It’s a great tool for me to use on my current student-athletes, ‘Guys, Flo is vaulting right now, what are you doing?'”

When she’s not training or competing, Meiler gives talks and presentations around Vermont, speaking on the importance of exercise and sport. She’s on the board of directors for the Vermont Senior Games. And when she’s not doing all things track and field, Meiler is playing tennis or out dancing with her husband of 58 years.

“[Track and field] is Flo’s way of saying the world can’t stop me,” Berg said. “She can do whatever she puts her mind to, and it’s awe-inspiring.”

Meiler has been training six days a week for the National Senior Games, also known as the Senior Olympics, in Albuquerque, New Mexico, in June. Every five years, athletes move into a new age bracket — and this year, Meiler will be placed in the 85-90 age group — and for her, that means she gets to win new medals and break new records in an unfamiliar age bracket.