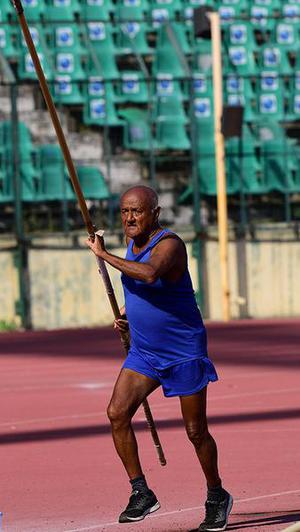 S. Muthukumaraswamy evoked interest in a few football fans present and this reporter covering the CFA senior division football match at the Nehru Stadium on Wednesday. He is 82 and was practising pole vault!

When approached, he said he’s representing India at the World Masters Athletics (WMA) championship to be held at Malaga, Spain, in September. He will participate in pole vault, 100m sprint and decathlon.

“I expect to win a silver each in pole vault and decathlon,” he said.

He has won the pole vault bronze in the 2017 Asia Masters Athletics (AMA) championship in Rugao, China.

It is after an almost two-month injury layoff that he’s started his preparation for the World meet on Wednesday. “I had a groin injury,” he said.

He has won four medals in the 2017 National Masters swimming championship conducted by the Swimming Federation of India in Mysuru.

He will be 83 when he competes at the World Masters.