Super Seniors DNA could hold the secret to healthy aging!

A lucky few are able to stay active and keep their cognition sharp well into their 80s. What’s their secret? Researchers are looking at their DNA to find out 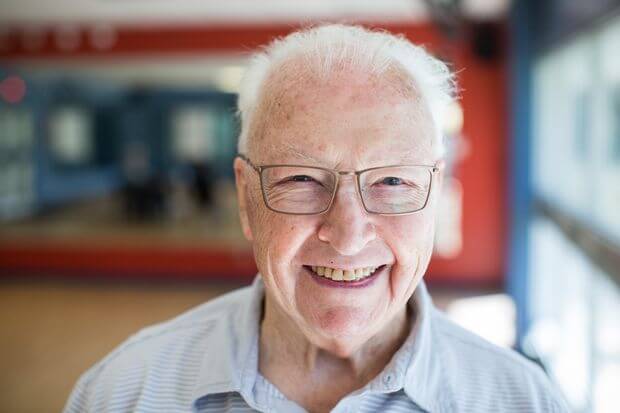 Donald Faulkner, 88, smiles during an exercise class at the Ladner Leisure Centre in Delta, B.C. He is part of the Super-Seniors Study, a research project looking at how unusually good genetics have helped some people to live healthier in old age.

Donald Faulkner makes aging look easy. At 88, he hits the gym twice a week, plays on a curling team in winter and drives from Tsawwassen to Vancouver for Sunday dinners with his daughter. On Fridays, he joins pals for happy hour in the lobby of his seniors’ residence, sipping a rum-and-Coke and dancing to oldies music.

He has few health complaints, other than arthritis, leg pain and hay fever, although he smoked for 20 years, and was an enthusiastic drinker until he cut down in midlife. He’s mentally sharp and physically fit, but his type of longevity should come with a disclaimer: results not typical.

Faulkner belongs to a select group of Canadians with a real-life superpower: healthy aging. He and 699 others are part of a continuing project called the Super-Seniors Study, led by Angela Brooks-Wilson, a geneticist at BC Cancer Agency and chair of the department of biomedical physiology and kinesiology at Simon Fraser University. To qualify, participants must be at least 85 and never diagnosed with the top-five killer diseases: cancer, cardiovascular disease, diabetes, dementia and pulmonary disease. This puts them in roughly the top 1 per cent of their age group for health, Dr. Brooks-Wilson said.

The project, launched in 2002, is one of a handful of studies aimed at discovering what gives healthy elderly a leg up, instead of focusing on what makes people sick. Researchers are examining the hardy descendants of Vikings in Iceland, healthy centenarians in the Ashkenazi Jewish population, and spry seniors enrolled in the California-based “Wellderly” study.

Many of the scientists involved in these studies have singled out genetics as the most likely explanation for extraordinary vitality in old age. They hope to pinpoint genetic variants that protect against disease, paving the way for pharmaceutical companies to “design a drug to mimic them,” Dr. Brooks-Wilson said.

The goal may not be as elusive as it sounds. Scientists have already succeeded in delaying aging in worms and mice. Human trials of drugs to prevent age-related diseases are also in the works. (See sidebar.)

But this line of thinking flies in the face of our unshakable belief that, with the right habits, we too can join the ranks of marathon-running nonagenarians. Spurred by the multibillion-dollar wellness industry, we slurp green smoothies and tie ourselves into yoga knots. We swallow supplements ranging from fern extract to powdered reishi, the so-called “mushroom of immortality,” clinging to the hope of maintaining a sound body and mind until the day we suddenly expire – peacefully in our sleep – at the ripe old age of 110.

Unfortunately, a healthy lifestyle will only get us so far, said Nir Barzilai, director of aging research at Albert Einstein College of Medicine in New York, who has studied healthy centenarians in the Ashkenazi community for nearly 20 years. “For average people, if they don’t smoke, if they exercise, if they’re not obese, they’re likely to get over the age of 80,” he said. But to stay disease-free into the triple digits, “it’s not enough.”

In greying nations such as Canada, the mission to prolong the number of years we remain healthy has become a race against time. Centenarians are the fastest-growing age group in Canada, numbering 8,230 in the 2016 Census. But the majority – two-thirds – are living out their days in nursing homes. If medical science could compress the amount of time people suffer from age-related diseases, those of us who make it to 100 would have a better shot at aging at home and maintaining the social relationships and activities that make life worthwhile.

Could the DNA of adults like Faulkner hold the secret to healthy aging? 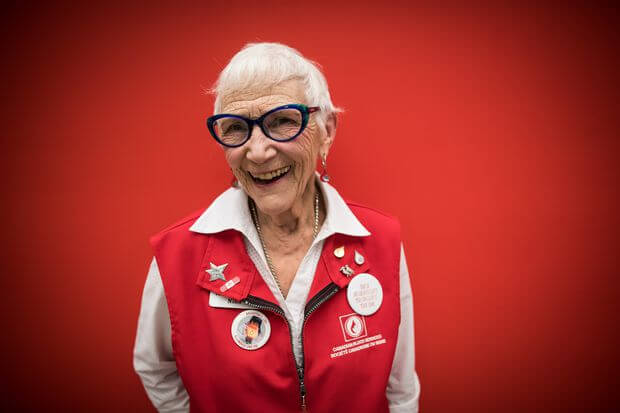 Lifestyles of the old and active

Nina Graham is a particularly chipper member of the group Brook-Wilson calls “supers.” The nimble 89-year-old spends her days volunteering at Canadian Blood Services, greeting travelers at Vancouver International Airport and working out at the gym near her apartment in Richmond, B.C.

On Wednesdays, she takes the SkyTrain to downtown Vancouver and walks several blocks to the YMCA, where she cranks up the tunes and teaches aerobics to women 20 years her junior. “If they see me doing it – the old lady – then they’ll do it,” she said with a chuckle.

Graham talks a mile a minute, peppering her stories with words like “suck it up” and “crackerjack.” She has no health issues and takes no medication – not even Aspirin – and chalks up her vitality to “a combination of lifestyle, genes, luck and determination.”

The vast majority of super-agers follow no special regimen, researchers say. Many of them drink, eat sweets and have squishy bellies like the rest of us.

About half of participants in the Super-Seniors Study are former smokers, and some had smoked for many years. This is encouraging for smokers entering midlife, Dr. Brooks-Wilson said, “because they can still increase their chances of being a super senior if they quit.”

While some in the group abstain from alcohol, most fall “well within the Canadian guidelines” for moderate drinking, she said. They have an average body mass index of 24.5 – at the upper end of the healthy range of 18.5 to 24.9. The finding suggests that as long as we remain in the healthy zone, “maybe we can be a little chubby.”

Many in the study cope with osteoporosis, vision problems from macular degeneration, and hearing loss. But despite their aches and pains, they tend to lead active lives. “Some of them still have jobs,” Dr. Brooks-Wilson said. “They’re organizing their own birthday parties, doing volunteer work – all kinds of things.”

Faulkner wonders whether lifelong learning has played a role in his cognitive health. After retiring from his career as a meteorologist, he began taking courses in French and humanities at Simon Fraser University. At 71 – half a century after completing his masters degree – he wore a cap and gown to a graduation ceremony in 2007 to accept a bachelor’s degree. “It’s something I’m rather proud I could do,” he said, adding that he heard from gerontologists at SFU that taking university courses was good for longevity.

But the jury is out on whether a lifetime of exercising the body and challenging the brain can ward off mental and physical decline. Super-agers, researchers say, may be fitter simply because of their genetic luck.

All in the family

Scientists are still trying to figure just how much of healthy aging is within our control. But in the meantime, there’s no doubt that exceptional longevity runs in families.

Dr. Brooks-Wilson was surprised by just how long the parents of supers-seniors had survived compared to their contemporaries. Before her team analyzed the data, “I thought, eh, we’ll find an average of three years maybe,” she said. “We found a decade.”

Faulkner’s father lived to age 93, and his brothers survived into their 90s. Two uncles on his father’s side made it to age 97.

Barzilai observed the same trend in Ashkenazi families. Barzilai is not only studying Ashkenazi centenarians, but also comparing the health of their offspring – now aged 75 to 80 – with that of age-matched controls without longevity in their families. While both groups have similar lifestyles, “the people who are coming from centenarians are healthier in every way,” he said. “They have less cardiovascular disease, less cancer, less dementia.”

Barzilai and colleagues combed through the full genomes of 44 Ashkenazi centenarians to determine their genetic risk for life-threatening diseases. “We basically asked if they had the perfect genome.” Instead, the researchers discovered that each of these healthy old-timers had multiple factors linked to a high probability of disease. Yet these undesirable variants “didn’t cause a disease in any one of them.”

Dr. Brooks-Wilson conducted a similar search after a gentleman contacted her saying his dad and his uncle – then aged 104 and 108 – might qualify for her study. She pulled out all the stops to collect genetic samples from the two brothers, who lived in Quebec, and speculated they might have a lower genetic risk for disease. But in lab results, “they had no fewer disease-related variants than the general population.”

Healthy centenarians, in other words, have roughly the same genetic risk for disease as the rest of us. So how do they keep cancer, cardiovascular disease and diabetes at bay?

Super-agers may have resilience factors that most people lack, Dr. Brooks-Wilson said. “Our current approach is to look for protective variants that might support healthy aging, and potentially protect against age-related diseases.”

Barzilai has already identified several protective variants. The centenarians he studies have mutations that increase “good cholesterol,” in addition to a variant that affects the signaling of growth hormone. All may affect longevity, he said.

Barzilai is convinced that with new drugs to target these and other pathways, scientists will eventually extend the average lifespan to 115 or 120 years, while reducing the period of suffering from age-related diseases by 10 to 20 years. “As a species,” he said, “we can do much better than we do now.”

But living longer isn’t necessarily better, even if we remain healthy till the very end.

Faulkner said his children motivate him to carry on. “They’re my rocks.” But asked how long he’d want to live if he could maintain his current health, he paused and said, “Oh, another five years, I guess.”

Graham doesn’t know what she’ll do when she can no longer volunteer. “If I’m not useful,” she said, “what on earth good is it?” She dreads the idea of outliving her friends, or ending up in the expensive seniors’ residence her daughter showed her recently. As grand as it is, “I’m not going in there with a bunch of old folk,” Graham said. “Forget it.”

People keep telling her she’ll make to a hundred. But, she said, her voice dropping to a whisper, “I tremble at the thought.” ​

Source: Could the DNA of these ‘super seniors’ hold the secret to healthy aging?