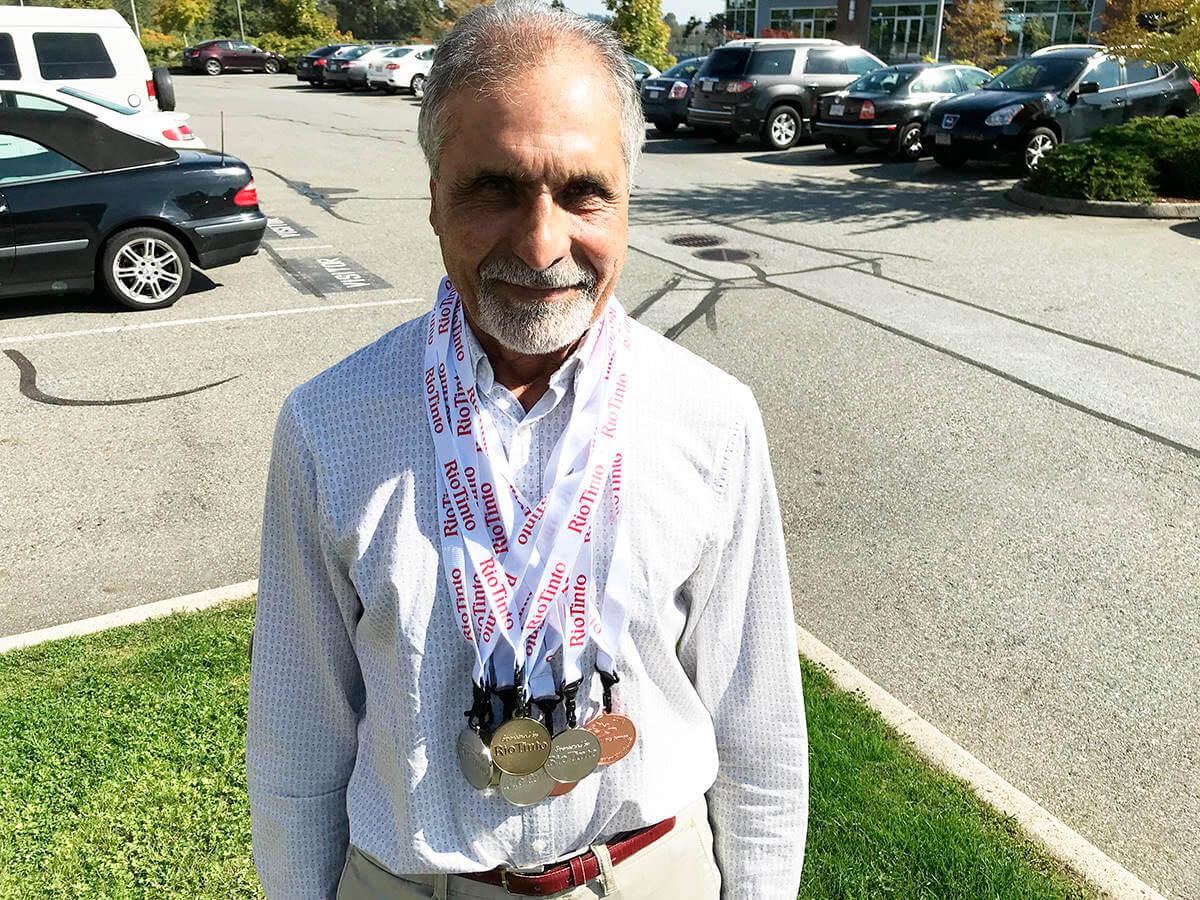 When he retired from working in a Delta sawmill, Surinder Shah got running again.

Growing up in India, he was fast on the track, mostly in the 400-metre distance, but Shah didn’t have much time for such athletic pursuits after he immigrated to Canada in the early 1970s.

Today, at the age 75, a full decade after his retirement, Shah is a medal-winning member of Greyhounds Masters Track & Field Club (greyhoundstrack.com), a Surrey-based organization.

In a couple of weeks, Shah will be among around a dozen members of the club heading to southern Utah for the 2018 Huntsman World Senior Games, which open Oct. 9 in the city of St. George, at Dixie State University’s Trail Blazer Stadium.

A Cloverdale-area resident, Shah can often be found running and jumping at North Surrey Secondary’s track.

“When I am there, so many people are asking me, ‘How old are you?’” Shah said. “I tell them and they say, ‘Oh, I want to join your club, too,’ and many other people can join.”

On a recent Wednesday afternoon, Shah visited the Now-Leader office with Bill McNamara, a fellow Greyhound.

“I got into it because again, like Surinder, I was running most of my life, and I co-chaired the Senior Games here in 2001, and if I’m organizing something, I participate in it as well,” said McNamara, a member of the club since 2000.

“Our club is at over a hundred members now, the Greyhounds, and every year we seem to get more and more of them,” he added.

“It’s good, the club, with a good coach and good people,” he said.

In mid-September at the 55+ B.C. Seniors Games in Kimberly and Cranbrook (55plusgames.ca), Shah earned medals in hurdles, long jump and running races. He was also a winner at the 2018 Canadian Masters Outdoor Championships, held at South Surrey Athletic Park from Aug. 3 to 5. There, the Greyhounds had 65 members competing in 215 events.

Shah also spent the summer preparing for competition at the Huntsman Games, launched in 1987 as the World Senior Games.

Every October, more than 2,500 seasonal volunteers help to host 30 athletic events over a two-week period, drawing athletes “from Japan to Russia and from Alaska to Australia,” according to the event website (seniorgames.net). “Scores of countries have participated in the Games, where peace among nations is fostered through friendly competition.”

The Games schedule includes everything from archery to volleyball, with basketball, cycling, badminton, softball, bowling, bridge, shuffleboard, power walking and racquetball among the other events. Naturally, Shah is most interested in the track and field events, which run from Oct. 15 to 17.

Here in Surrey, McNamara said he’s pushing to have an indoor track built somewhere in the city.

“Tuesdays and Thursdays, we’re usually at North Surrey (Secondary), and sometimes in Coquitlam,” he explained. “When the weather changes we head indoors to the Guildford rec centre. They have an indoor track there, a smaller track that’s good for training.

“But the thing I’ve been trying to get built in Surrey is an indoor track and field, multi-purpose stadium – that’s an eight-lane, 200-metre indoor track, where people can train and compete,” McNamara continued. “I’d like to see more competitions come here. They have one in Kamloops, and we go there quite often, so it’d be nice to stay home and compete at a facility like that. I think a lot of people want it, but it takes money to get it done. We’re hoping to have it be part of a 10-year strategic plan, but that’ll be the tail-end – I’ll be around 90 then, but we’re still pushing to have it.”

As it stands, McNamara and Shah are among “a big group of us in our 70s,” McNamara said. “But hardly anyone in their 60s comes out, because they’re still working or whatever, or maybe newly retired and they’re looking for something to do. Those are the people who should come to us.”