Skip to content
Master-Athlete.Com
Home » News » This 94-year-old is preparing for the World Masters Athletics Championships 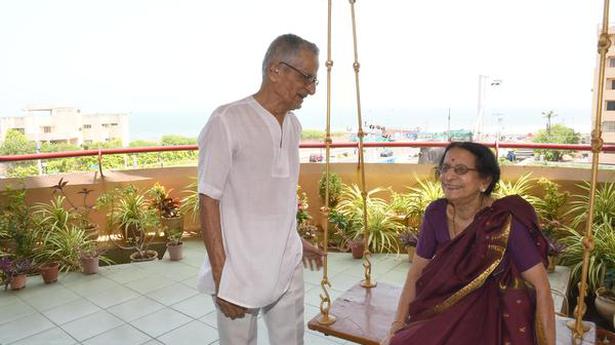 Meet Commander Sriramulu Vallabhajosyula (retd.), who at 94, is preparing for the 2018 World Masters Athletics Championships to be held in Spain

If you see an aged man brisk walking before dawn at the Beach Road, try not to ask him ‘Why are you angry so early in the morning?’ It’s most likely Sriramulu Vallabhajosyula, a 94-year-old currently preparing for the 2018 World Masters Athletics Championships (WMAC) in Malaga, Spain in September.

As a young officer in the Indian Navy, every day after work, Vallabhajosyula would go sailing. But after retirement, he found it difficult to continue sailing since there weren’t any sailing clubs in Visakhapatnam back then. Far from confining himself at home, he took to brisk-walking instead. Since then, he has won several national and international competitions.

The nonagenarian is in splits as he shares incidents from morning walks. As if being perceived as angry wasn’t enough, Sriramulu deals with questioning looks, when he tells people how old he is. “Why would I lie about my age? Nowadays, when someone asks me how old I am, I simply smile and continue walking,” he says, laughing again.

Vallabhajosyula knows these question are well spirited but it breaks the rhythm of the training. Hence, he starts as early as 3.45 am, so that he can beat the heat, the traffic and the questions, all at once. But not all situations allow him to dodge the questions. Some early mornings, a senior citizen walks up to him and asks, ‘What do you eat?’ to which he responds sincerely. Raising his eyebrows, Vallabhajosyula sighs and adds, “Over the years, my diet has reduced.’’ He wonders if his dinky diet would be reasonable for others. He continues, “More than what one eats, one must pay attention to what they do after eating.” Vallabhajosyula sees walking not only as a hobby but also a great way to stay fit and uses weights only to strengthen his muscles, as he feels building the upper body will increase the weight on knees.

During his training, he doesn’t like to wear a watch or carry a phone. This is a cause of concern for Satyavati, his wife, because he fell down few times while walking. “One time he fell and got a severe bruise on his nose. But he managed to come back home. Of course, I get worried. But once he puts his mind to something, it’s hard to talk him out of it. He gives his 100%”, says 86-year-old , expressing her daily joy when she sees Vallabhajosyula return after the walk.

It’s been over 40 years since Vallabhajosyula settled down in Visakhapatnam. He took this decision keeping in mind the city’s strong association with the Indian Navy and the proximity to Machilipatnam, his hometown. Apart from race walking, Vallabhajosyula is immersed in non-fiction and books on astronomy.

His passion for astronomy made him a Navigation Officer in the Indian Navy. He has also stayed in Mumbai, Kochi and Visakhapatnam. But passionately recommends this city for it’s easy-going lifestyle, and credits the friendly people of Visakhapatnam. who know how to communicate effectively. Apart from the Beach Road, he recommends walkers of Visakhapatnam to walk up Kailasagiri Giri and enjoy the satisfying sea breeze after a challenging climb.