I am obviously going to be biased here as a 200 and 400m runner, but wow the timetable that has finally been published by the Toronto LOC is crazy! (Maybe) but… see below

For the full schedule of events look HERE

You can see in the pictures below how the events have been squashed into each other: 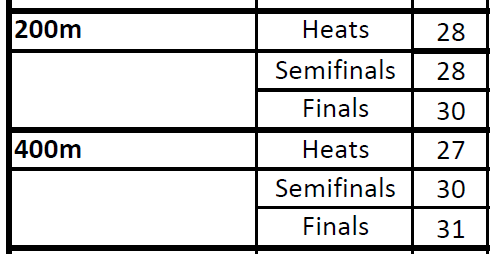 Note that all age groups compete on the same days, I only grabbed the M35 as that is my age group.

It tends to be the case that most 400m runners will also be 200m runners and so this is either impossible or improbable for about 99% of athletes. And definitely favours the 100 &200 combo athlete.  This will no doubt reduce entries into the sprints for the longer sprinters but of course what this does do on the flip side is allow 100m runners to double up where at recent championships the 100 and 200 have been split by the 400 meaning the short sprinters would need to stay at the championships for a longer time if they wanted to compete in the 100/200 and relays.

However!….. The eureka Moment

So apart from a personal grudge at not really being able to compete in 2 events that I love, this has shown the LOC with still a year to go to be “On Their Game” publishing the schedule so far in advance to allow us to prepare, and condensing the sprints/relays into one full week, meaning for those using holiday allowance and covering costs of the break can in some slight way control costs.

You can clearly see that this schedule has been devised clearly knowing that it is hard for people to commit to longer trips for championships, identifying which event athletes usually are involved in the relays and putting them into the second half of the champs is a superb move!