Ugo Sansonetti, an Italian business executive who began runningtrack in his 70s, won numerous medals at World Masters Athletic Championship events and broke several world records, died on Aug. 14 in Rome. He was 100.

By the time Mr. Sansonetti began running competitively, he had already led an eventful life. An adventurous, athletic scion of a wealthy landowning family, he had been the mayor of his hometown and had spent years in Costa Rica overseeing a settlement of Italian migrants who had cleared rain forest to build it.

In the early 1960s, having returned home with his family, he helped establish the Italian division of the frozen food giant Findus, based in Sweden. He served as its executive director and a consultant until retiring at age 76 in 1995.

That’s when his athletic career took off.

He started running because he was bored in retirement, his daughter said, and by his 80s he had begun to make a name for himself in races.

In all, according to his website, Mr. Sansonetti won 42 gold medals at the World Masters Athletic Championships, a competition for older track and field athletes that has age categories in five-year increments.

“In athletics, and in sports in general, there’s fun, hard work and conquest: You need persistence,” Mr. Sansonetti told the Italian newspaper Il Messaggero in January. “Those things shape a person, at any age.”

Masters Runners Who Have Redefined Possibilities 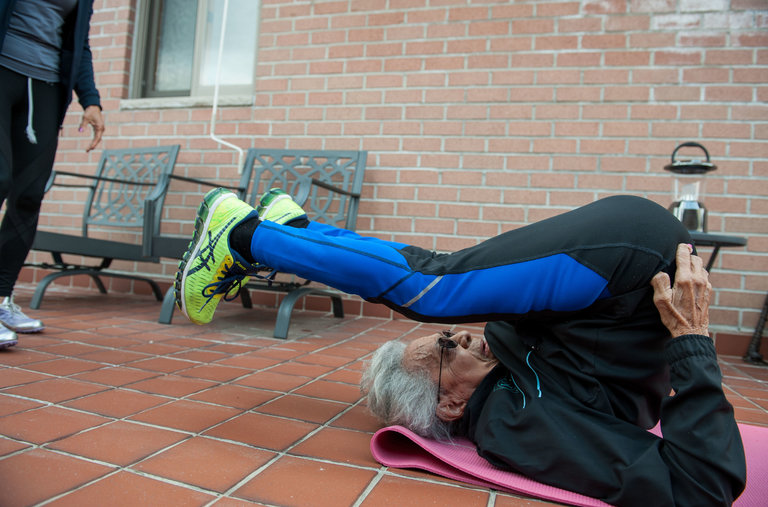 It took the unusual event of a snowfall in Rome to force Mr. Sansonetti’s retirement from athletics, at 93. During a walk in the city he slipped and broke his thigh bone.

He switched to swimming. It was just another example of his persistence.

“As soon as he broke a record, he immediately began thinking about the next record to break,” said Claudio Rapaccioni, the president of A.S.D. Romatletica, Mr. Sansonetti’s running club. “To him, life was about never stopping.”

In fact, Mr. Sansonetti covered a lot of ground.

He was born on Jan. 10, 1919, in Rome, the third of nine children of Luigi Sansonetti, an admiral in the Italian Navy, and Adele(Clarini) Sansonetti, a homemaker. His landowning family held property in the southern region of Puglia. As a young man, he played soccer and tennis, windsurfed and water-skied.

He studied law at the Sapienza University in Rome and graduated, he once said in an interview, the day before Italy entered World War II, in 1940. During the war, Mr. Sansonetti tended to the family’s estate in Mottola, a small town in Puglia. He married Carla Garroni in 1946.

Mr. Sansonetti was elected mayor of Mottola, but his political career lasted only a year.

Two of his older brothers, Vito and Giulio, had led a group of Italian migrants to San Vito de Java, Costa Rica, where they cleared acres of forest before building a settlement and cultivating tobacco. In 1952, Giulio died in a plane crash, and Mr. Sansonetti soon felt an obligation to take his brother’s place, a great-nephew, Piero Sansonetti, said.

Mr. Sansonetti moved with his wife and five children to Costa Rica, where the couple had five more children. There he oversaw all aspects of the settlement’s life, including the construction of furniture for the settlers’ homes and the transportation of the tobacco crop.

Challenges abounded. “Our colony was invaded by grasshoppers, by insects, and repeatedly flooded, but my father just never gave up,” his daughter Ludovica said.

Mr. Sansonetti returned to Italy in 1962 for the education of his younger children. “We were growing up a little too wild,” his daughter said.

In addition to Ludovica Sansonetti, he is survived by his nine other children: Marina, Barbara, Carlo, Anna, Gabriella, Giulio, Andrea, Monica and Giovanni. Other survivors include 26 grandchildren and 12 great-grandchildren.

Along with running and swimming, Mr. Sansonetti dabbled in another realm: weightlessness. At 85, he took part in a zero-gravity flight.

Like many a sports champion, Mr. Sansonetti also had an advertising career. In 2006, at the tender age of 87, he was hired by Coca-Cola España for a television commercial in which he ran, played soccer and — despite the advice of his great-grandchildren — took pride in drinking carbonated drinks. He also appeared in a commercial for Bertolli food products in which he surprised townspeople by running after, and catching, a runaway baby carriage.

Mr. Sansonetti published two memoirs. The first, “Coto Brus, Where the Trees Hold Up the Sky” (2000), recounted his experience in Costa Rica. The second, “Never Stop! Keeping Young Into Your 80s and Beyond” (2003), was about his sports career. He also published a compilation of essays, “SMS: Messages to New Generations” (2008).

In a 2010 interview with the newspaper La Repubblica, he attributed his late-life running success to his resilience and to drinking milk every day. “But, God forbid,” he added, “not hot milk.”