Skip to content
Master-Athlete.Com
Home » Nutrition » Adaptogens: Ones That work For Athletes 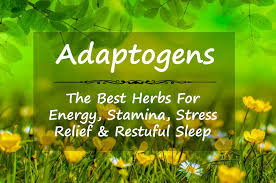 Adaptogens for athletes! which are the best and how to use them!

Over the years, I have come across adaptogens on many occasions and wondered how could they helps with athletics? Well I have tried a few  including Ginseng etc and found to have some benefits.  Below I take a look at some of the more popular adaptogens and how they could help.

If there was something that I thought every athlete should add to their arsenal, it would be mushroom and herbal adaptogens.  Lets put aside creatine, BCAA supplementation, glutamine and any other ergogenic aid. These only address the physical demand, while neglecting the psychological and emotional needs of an athlete, and the biological and chemical stressors that deplete strength and endurance. That’s where Adaptogens come into play!

What many people don’t think about when it comes to power, speed and endurance is that there is more to it than the physical output. Talent will only take you so far without drive, and the strength of your body is only as strong as the strength of your mind, emotions and immune system. What really makes people stand out in sports is a superior work ethic and drive, consistent performance, health, focus and composure under stressful conditions. Just like you can’t teach someone will, physical ergogenic aids will not produce all of the other attributes that make a champion. But what if there was something that could increase your drive, stabilize your emotions and increase physical output? There is, and they are in the elite group called adaptogens.

Adaptogens increase the body’s resistance to physical (heat, cold and exertion), chemical (toxins and heavy metals) and biological (bacteria and viruses) stressors. What makes them special is that they help modulate the body’s stress response so that it does not overreact to extreme physical, mental, emotional or chemical stress which depletes cells of vital energy. When hormones like cortisol are secreted in excess, they can do quite a bit of damage on your body leading to total exhaustion.

Adaptogens help resist and adapt to the stress, restoring balance in the cardiovascular, immune and neuroendocrine system while causing minimal (if any) physiological disturbance, side effects or toxicity. Maintaining high testosterone levels are crucial for muscle mass, recovery, confidence, and determination, while high physical and mental stress can squander the hormone and the results from it. Adaptogens can help protect testosterone by helping the body adapt to stressful conditions.

Adaptogens have been a subject of Soviet research for quite some time, and studies revealed that they increased swimming times in the Porsolt test, AKA forced swimming test. This would evolve into rigorous studies that researched how they helped the body adapt to all unfavorable conditions from Olympic competition, combat, space travel, and everyday stress. The ability of the adaptogens to help boost energy while burning energy allows you to stay at the top of your game until the end. 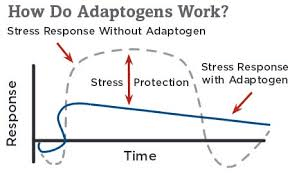 The mechanisms behind this action include increasing levels of ATP (energy) and creatine phosphate (power). They contain powerful antioxidants and protect the mitochondria cell membranes and DNA while increasing cardiovascular function and oxygen efficiency. Adaptogens also increase the manufacture of proteins and other substances for the repair of damages. This combination makes adaptogens the ideal accessory to an optimal diet for power, speed, and endurance.

Adaptogens tend to work best as a synergistic combination and work differently than a stimulant like caffeine. What you notice may appear subtle because your body will be functioning at its optimal level. In other words, it will appear that it’s coming from you, not a supplement. It’s when you stop taking it that you notice a difference. It shows up as mental toughness and stamina, emotional stability, and an inherent drive to want to work out, compete and push yourself. One of the best indicators of your body’s adaptation process is the want and need to mentally and physically work your body. If you are dreading going to the gym or practice, or you mentally want to check out, then adaptogens will help you break out of this cycle.

*All mushrooms should be hot water extracts or hot-water/ethanol extracts like those found in studies.

Ages: Considered safe for teenagers and up

Cordyceps is an extremely unique medicinal mushroom that grows wild on various insects and arthropods in the high mountains of China, Nepal, and Tibet. This type is known as Cordyceps Sinesis. The spores of the fungi find a host in a population that has grown too large, and restore balance by taking over the host and growing a new mushroom. Marks have been found on fossilized leaves, suggesting the role of this fungus-host takeover has evolved for more than 48 million years.

Cordyceps Militaris is a fruiting body form of cordyceps. Both types of cordyceps contain adenosine, cordycepic acid, cordycepin and other related compounds. These compounds help with modulating nitric oxide and inflammation, adrenal fatigue, adrenal depletion and resistance to physical, mental and emotional stress. It is through this mechanism that can increase energy levels, stamina, and endurance. Cordyceps also contain the well-studied beta glucans, which support immune function.

People have used cordyceps to help acclimate to high altitudes by increasing oxygen capacity. This ability carries over into athletic performance, increasing stamina and endurance through better oxygen transportation. Since athletes who perform endurance training undergo oxidative stress and potentially suffer from over-training syndrome, cordyceps should be the first choice of adaptation. The response and results for both males and females in any age bracket have made this the #1 choice for adaptogens.

Reishi and Cordyceps both have a reputation for longevity and immunity (see cold and flu article), with reishi being known as the “mushroom of immortality.” Who wouldn’t want to take that? In particular, both of these have been found to combat inflammation in the form of superoxide (what causes expedited aging, and excessive oxidative stress is an important mediator of a decline in steroid hormone production), prevent hypoxia and high altitude sickness by increasing oxygenation.

Cordyceps main targets are the lungs, adrenals/kidneys and reproductive organs, while reishi targets the lungs and heart, demonstrating cardiotonic, anti-allergy and anti-bronchitis effects in studies.

The Cordyceps and Reishi Cyclist Study

A double-blind clinical study had 7 male cyclists ages 30-40 divided into 2 well trained/5 at risk of overtraining groups, take placebo supplements for the first month and then active supplements of cordyceps and reishi for the following 3 months.

Ashwagandha is a root used traditional in Ayurvedic medicine for over 2,500 years. Studies have shown that it reduces stress, memory enhancement, antioxidant activity and enhanced immune function.

One study showed faster swimming time in rats, longer duration of muscle contractility in the heart muscle of frogs and increased glycogen storage capacity in the liver.

A fourth study used elite Indian cyclists for 8 weeks. One group received 500mg of the root extract 2x a day, while the other group received a placebo. There was significant improvement in the experimental group in all parameters, namely, VO2 max and time for exhaustion on the treadmill.

Ashwagandha appears to be an excellent adaptogen for both endurance and strength athletes, as well as those under tremendous physical, mental or emotional stress. Ashwagandha can also help normalize thyroid function by converting T4 to T3. Avoid during pregnancy.

Also known as Siberian Ginseng, eleuthero is a small, woody shrub native to the mountain forests of Northeastern Asia. It has been used for centuries in China and Russia to prevent colds and flu, increase energy, vitality, and longevity. It has been shown in both in vitro and animal models to increase endurance, muscle strength, increase memory and learning, anti-fatigue, increase immunity, and anti-depressant effects.

One study found after 8 weeks of 800mg, VO2 peak of the subjects elevated 12%, endurance time improved 23%, the highest heart rate increased 4%, and metabolism was altered which spared glycogen storage. The study concluded that “this was the first well-conducted study that shows that 8-week ES supplementation enhances endurance capacity, elevates cardiovascular functions and alters the metabolism for sparing glycogen in recreationally trained males.”

The adaptogenic properties of ginseng are believed to be due to its effects on hypothalamic–pituitary–adrenal axis, resulting in elevated plasma corticotropin and corticosteroids levels. A thorough review of the human studies to withstand adverse conditions (heat, noise, motion, work-load increase and exercise) to improve auditory disturbances, mental alertness, intellectual work capacity, work output, quality of work and athletic performance concluded the evidence is extensive. The Complete German Commission E Monographs indicated Eleuthero Root is “a tonic for invigoration and fortification in times of fatigue, and debility or declining capacity for work and concentration.”

In Mongolia, it is used to accelerate adaptation of new people to the harsh mountain and desert climate. In the U.S., it has been used for a rapid recovery from exercise. It has also be found to be effective for treating upper respiratory tract infections, common with runners.

The quality you purchase is very important because many commercial products can have little to none of the herb at all along with contamination. Avoid taking past 3:00 in the afternoon since it can affect sleep.

I will admit it, Rhodiola is a mystery to me. The science is astounding, and the history behind it is equally as interesting. It was recorded to be used in ancient Greece, and the Vikings relied on it for strength and endurance. I mean c’mon, have you seen pictures of those guys? Yet it seems to be very hit or miss with people. That is the nature of adaptogens, however, and you need to find the right fit for you.

In terms of Rhodiola, my impression from the research shows that it appears to have the most effect on mental performance, which drives physical performance. In multiple double-blind, placebo-controlled trials, Rhodiola Rosea enhanced learning, prevented mental fatigue, reduced errors and improved the quality of work produced.1,2 Rhodiola Rosea has the most pronounced effect on mental fatigue during stress and strain when compared to other adaptogens.

This could prove invaluable if you need to increase your drive, focus and will to push through the pain when your body can go much longer than your mind. Numerous Soviet studies have shown that Rhodiola not only enhances learning and memory, but it improves mental speed, accuracy, work capacity, abstract thinking, reaction time and errors. Biochemically, it raises levels of the feel-good neurotransmitters serotonin, norepinephrine and dopamine in the brainstem, cerebral cortex, and hypothalamus. It may be contraindicated in those with bipolar disorder or manic depression.

If you are interested in reading more about it, I highly recommend the book The Rhodiola Revolution: Transform Your Health with the Herbal Breakthrough of the 21st Century

. Rhodiola is inexpensive but buy from reputable brands for quality control like the one in the link.

Ages: Considered safe for teenagers and up

Chaga grows on wild birch trees in the extremely cold, inhospitable environments of Siberia, Canada and parts of northern America. The incredible compounds of Chaga are mostly due to the nutrients of the wild birch trees that are transferred to the mushroom. Chaga contains a multitude of minerals and is one of the highest sources of superoxide dismutase (SOD) known, responsible for blocking the toxicity of free radicals. In one study, the researchers concluded that Chaga mushroom extracts might represent a valuable source of biologically active compounds with potential for protecting cellular DNA from oxidative damage in vitro.3 This is important for those undergoing heavy endurance training and oxidative damage.

2. Spasov, A. A., et al., “A Double-Blind, Placebo-Controlled Pilot Study of the Stimulating and Adaptogenic Effect of Rhodiola Rosea SHR-5 Extract on the Fatigue of Students Caused by Stress during an Examination Period with a Repeated Low-Dose Regimen,” Phytomedicine 7, no. f2 (2000): 76-78.

Take a look through my NUTRITION page to read up all the best strategies.