The use of Electrical Shocks for training purposes is nothing new to me at all; in fact I’ve used EMS pretty much since I started athletics ever since I read about it from Charlie Francis!

And although the unit I have can be used (apparently) for recovery I admit I have never used it in this way! Why? Because it’s more of a hassle to set up several wires just to recover, in my mind id rather use that set up time to use it for its maximum strength training ability.

So what about Recovery?

Well that’s where the device ‘Firefly’ comes in (no not the once great TV show!) a device that is touted as being purely for recovery and one that I came across stalking athletes on Instagram (I mean for training purposes!) As they were showing/advertising these products between races and events as a way of recovery without the effort!

One of the key differences of the firefly from the more popular EMS Units is that it stimulates the neuromuscular system rather than the muscle. Firefly says this is less painful because of the different and higher currencies required for direct muscle stimulation.

As I’ve already indicated I want a product that requires less set up and this product certainly does that! A simple wrap around device below the knee that comes individually wrapped in silver foil. 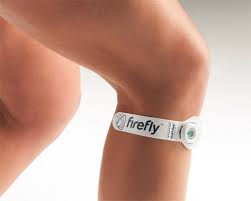 In each pack you receive two fireflies, which feature the Onpulse technology, one abrasive pad; two electrode prep wipes and fitting instructions. Ours also came with a knee strap for added security, though that’s £25 extra.

The down side of these devices is they are disposable! Yep! Disposable! The devices only have a 24 hour lifespan with a recommended session time of 3-4 hours!

Whilst I have of course used EMS machines and still do, nothing quiet prepares you for a pulsating muscle at rest, performed by a stimulation of the nerve from a single point!
Seven levels of stimulation provide a range of currents to course through your system, depending on how rigorous a recovery stimulus you’re after. The instructions say to take to a level that causes your muscles to visually contract and move your feet! If you’re familiar with EMS this isn’t really an issue, but to the uninitiated this could be a strange sensation indeed.

Optimum use time is 3-4hrs, with 24hrs of electrostimulation in each firefly, which does mean that yes these are a throw away consumable product. There is no way of replacing the batteries in these, which to me seems a huge waste if you intend to use these products often. Which mean to the average athlete like me this could become a very costly method of recovery. And one in this age confuses and somewhat annoys me! But of course a very good marketing and sales idea for Firefly of course! 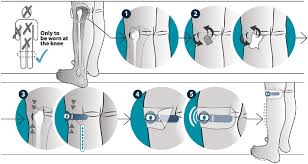 Post-hard training sessions or races are where it purports to be best used and gain maximum benefits. Last year at the European Masters Championships in Aarhus Denmark I had a fairly condensed race schedule competing in the 400, 200 and both relays. This is where I chose to risk it and use the device for the 1st time. And yes I did feel as though I recovered well between rounds and the events. Similar to what I probably could achieve with a full active recovery session and perhaps and extra day’s recovery. So For me these devices to appear work as advertised and be of benefit. And as I now approach a higher training load going into the European Indoor Masters championships in Madrid I will once again open a packet and use in my build up and during the competition itself.

Overall, the firefly certainly appeals to good age-group athletes who are seeking icing on the performance cake; it’s designed for hard trainers and committed athletes who’ve nailed their training, sleep and nutrition. Also, perception counts for a lot. So if you feel you’re doing everything possible to maximize your performance, you could eek out that extra 2%.

It’s more practical to take and carry around when travelling or at races than my trusted EMS machine and not as big a deal if you lose them, but is it good value?
As a tool for recovery I do rate its ability, but of course this means committing 3-4 hours of your time to use it (could this time be better used doing active recovery?) and perhaps are traveling and or competing then I believe this is a worthwhile device. But it does come at a cost!

I purchased 4 pairs, one pair I gave to a friend to try himself. I used one pair during my Aarhus competition 4 sessions of 4 hours and will now use the remaining two pairs over the coming weeks and subsequent competition. If it means that I am able to train that little bit harder and race that little bit faster, it’s worth it!