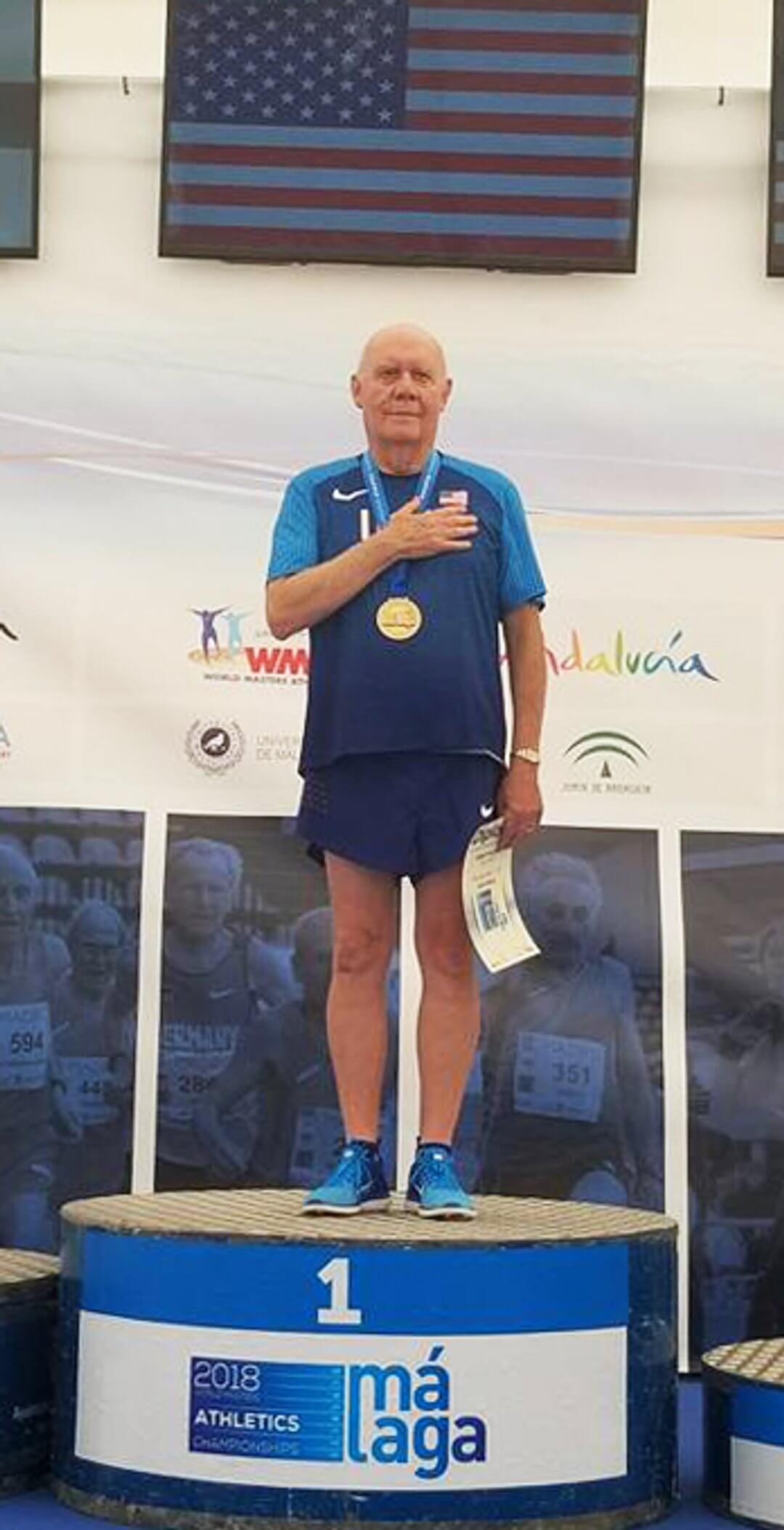 Bob Arledge stands at attention wearing his gold medal with American flag displayed above him and the national anthem playing after winning in Malaga, Spain, Sept. 12
Otterbein Senior Life – Lebanon/Provided

On Sept. 12, 2018, in the seaside town of Malaga, Spain, at the age of 85, he vaulted his way to the gold medal in the World Masters Track and Field Championship.

“It was a beautiful stadium,” said Arledge. “They were having an unusual hot spell. Down on the field where we were vaulting it was 110.”

“That kind of heat is not conducive for old men,” Arledge noted. “I was able to win. I was pretty happy about it.”

Arledge lives with Gail, his wife of 61 years, at Otterbein Senior Life in Lebanon, Ohio. Otterbein also has retirement communities in Loveland and Union Township, among other locations.

Anna Gallagher, Otterbein marketing director, told how the whole Otterbein YMCA was cheering for him and took great joy in seeing his courage to chase the dream and win.

“When he won the gold in Spain, word traveled fast and he was the talk of Otterbein,” said Gallagher. “He has a heart for his community. You see that in how he gives back to the youth in high school pole vaulting programs.” 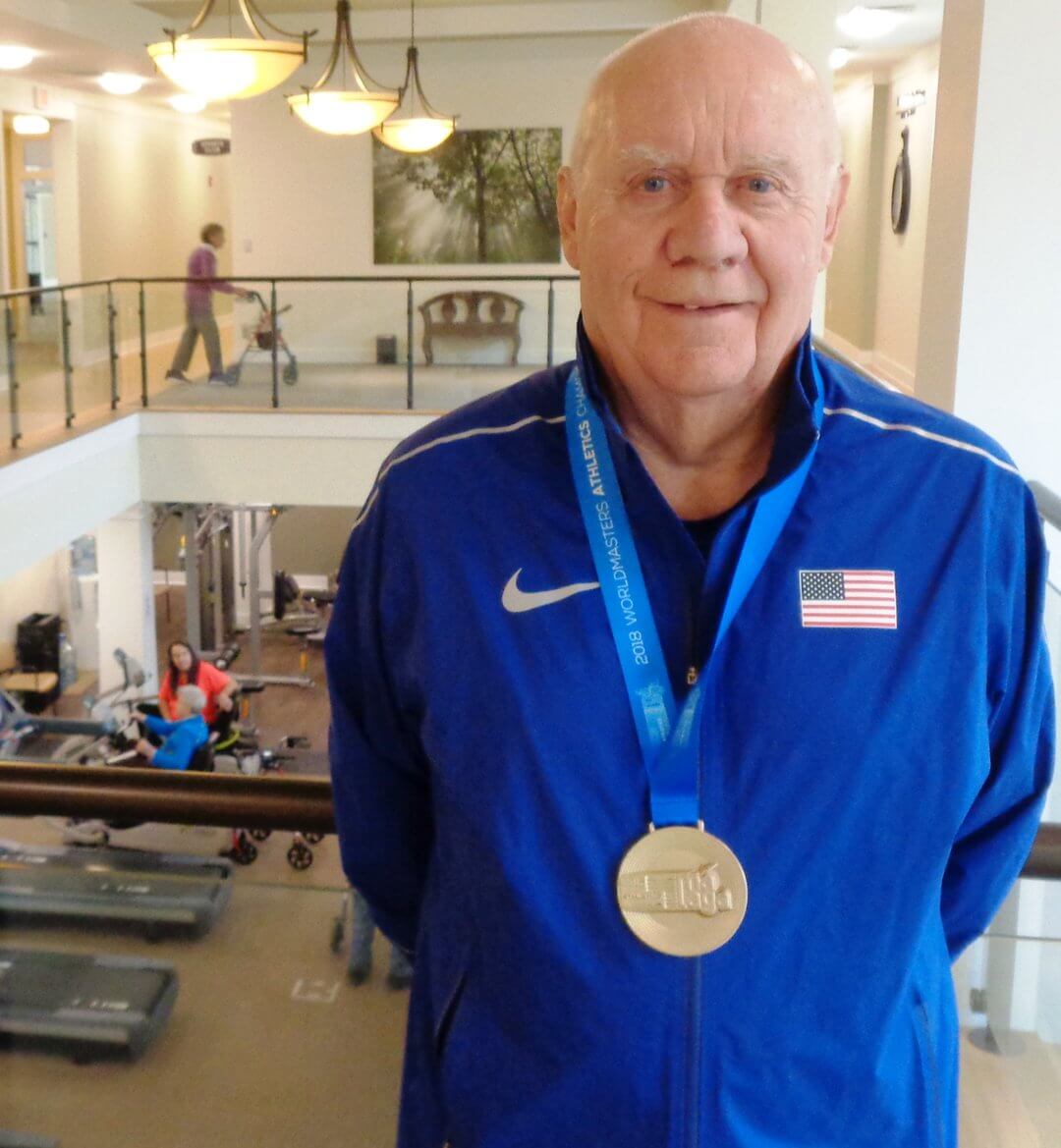 Bob Arledge proudly wore the U.S. track suit while winning the gold medal in Malaga, Spain, during the World Masters Track and Field Championships Sept. 12.
Chuck Gibson for The Enquirer

Arledge began pole vaulting as a curious seventh-grade youth. After seeing high school pole vaulters he decided to try it. He and a friend built a standard with some lumber and a bamboo fishing pole, used a bamboo rod from a new carpet roll and began vaulting into a pile of sand on a new home construction site.

“We got in trouble because we spread the sand all out and they wanted it piled up to shovel into the concrete mixer,” he remembered.

Arledge vaulted in high school and at Otterbein College. He was pretty good vaulting 12 feet 3 inches to 12 feet 6 inches and earning as high as fourth place standing in the Ohio Valley Conference.

“We landed in sawdust or sand,” said Arledge. “Now it’s nice you just land on a big foam pad.”

After graduating from Otterbein and getting his physical therapy certification from the Cleveland Clinic, Arledge joined the U.S. Air Force. He retired at 55 as a colonel and associate chief of Biomedical Sciences Corps. During 31 years of a “fit to fight” exercise regimen he never pole vaulted in the military.

“When I retired, I quit exercising, I gained weight, just lost my fitness,” Arledge said. 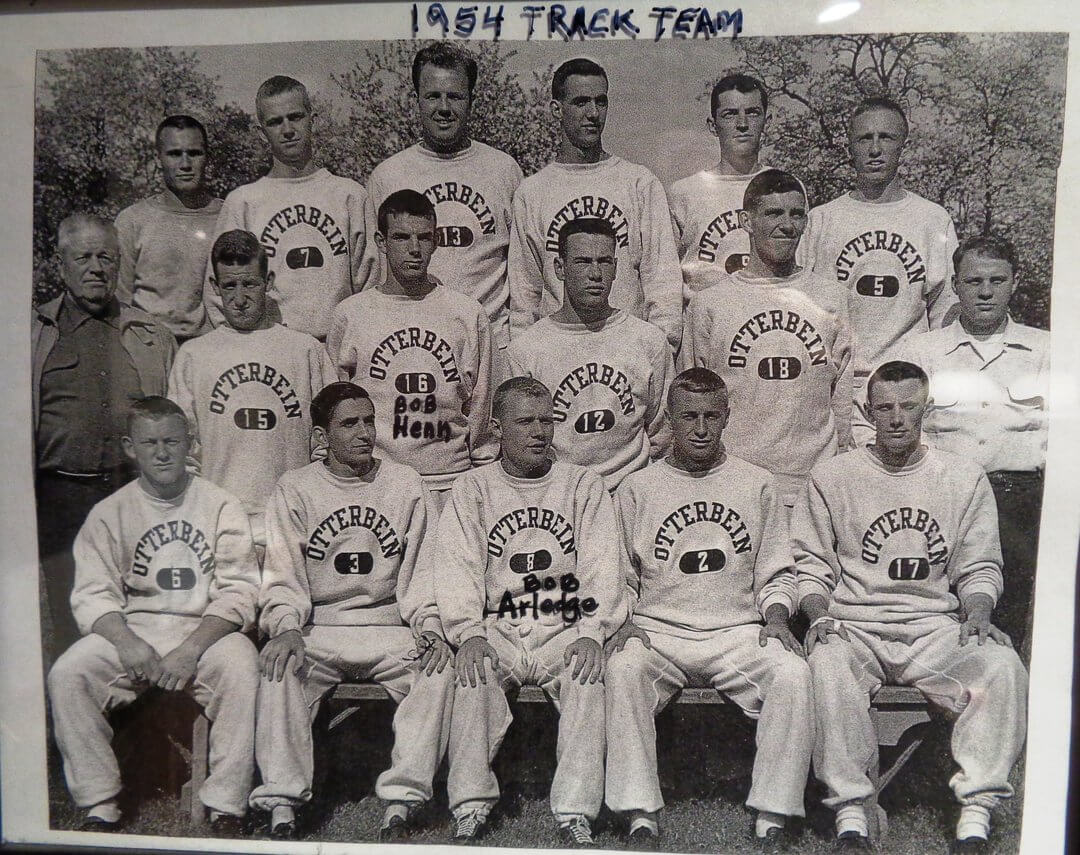 One day his doctor told him he had “some heart things going on” and was pre-diabetic. An old Otterbein friend who was still pole vaulting invited him to a pole vaulting meet in Canton, Ohio. He thought it would be just like riding a bike.

“I couldn’t do it. I couldn’t get off the ground,” said Arledge. “It was humiliating. I vowed then I’d start training.”

Arledge was over 70 years of age but started training again. At Otterbein he swims three times in the pool every week, lifts weights in the gym twice a week, and pole vaults two times weekly.

Over the last 10-12 years, he’s helped high school pole vaulters as a volunteer assistant coach. They were a little hesitant to talk with him the first two days he helped out a girls team a few years back.

“The third night I went home and said: Well, I’m one of the girls now. They were all talking to me,” he said. “That was kind of a fun story.”

The guys with whom he travels and competes now know Arledge likes to have fun. When not wearing his United States track uniform at meets, he wears “very colorful” superhero outfits. The other guys usually wear gray or black and get laughs poking fun at “the guy who comes out looking like a Christmas Tree.” Age is taking its toll on these 85- to 89-year-old men with some dropping out due to injuries or even death. He’s had his share of injuries with a dislocated shoulder, broken rib, knee surgery and assorted muscle strains. 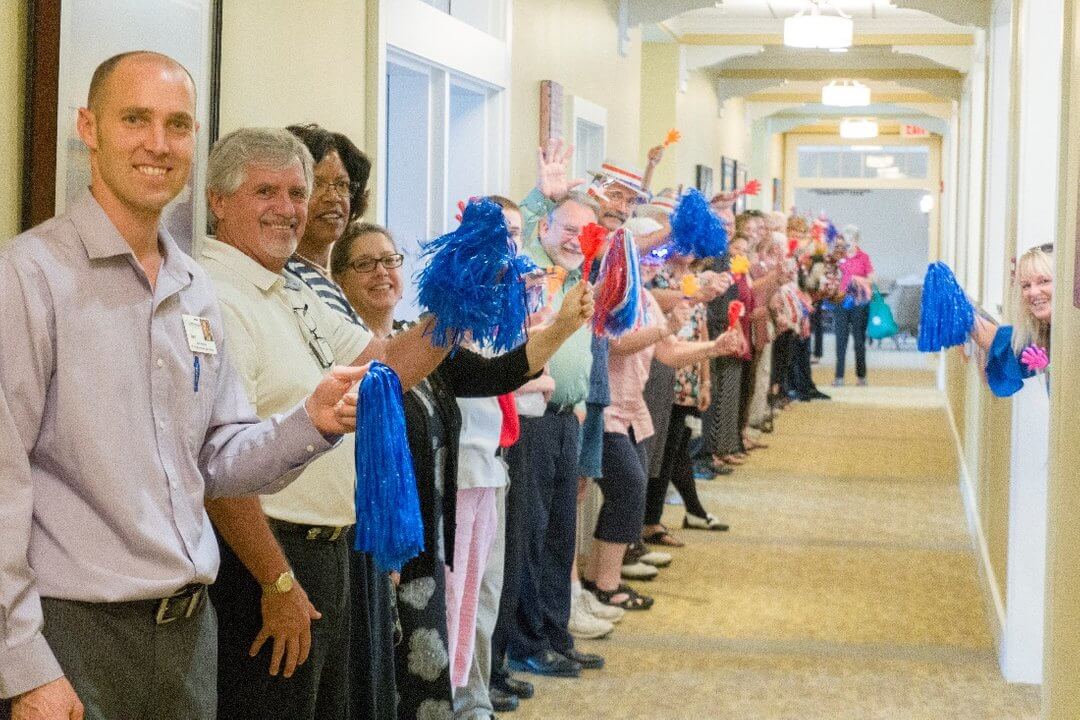 Arledge says he continued to get better every year until last year. He was vaulting over 7 feet, but now won the gold medal with a vault of 5 feet 10 inches. It was still better than the favored vaulter from Finland Ake Lund who missed at about 5 feet 7 inches.

“Once I made it, I had goosebumps; it felt pretty good,” Arledge said. “Then I lost my juice. The adrenaline quit flowing. I was going to try 6 feet 6 inches, but I had no more juice.”

Then Arledge stood on the podium, the American flag displayed, the national anthem playing with Ake Lund staring at him in disbelief. Bob Arledge, 85-year-old representative of the United States, has won every major event including U.S. and Canada Nationals with only one exception: the National Senior Games. He aims to win that next year.

“Graham Morgan, who vaulted for the Air Force Academy and coaches at Lebanon, works with me and helps me a lot,” said Arledge.

“Even with my limited physical skill at this age in my life, I still learn certain things to help me.”