Sub Inspector G. Balraj is gearing up to take part in the 800-meter run at the World Masters Athletics Championship, Spain. 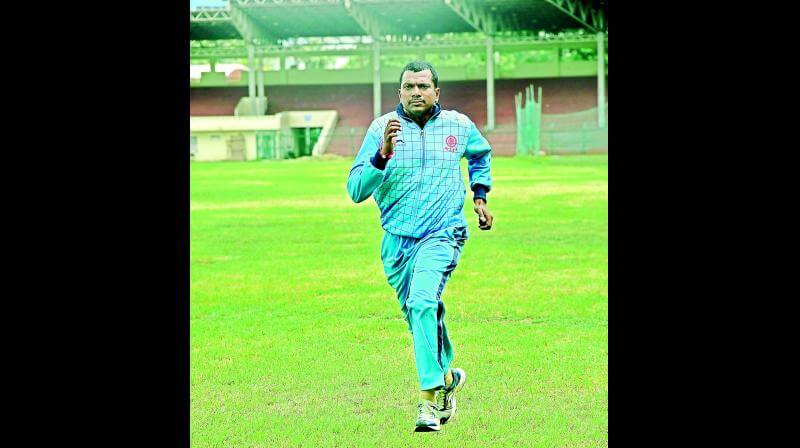 Sub Inspector G. Balraj, of the Chikkadpally Traffic Police Station, is on cloud nine. The cop has the privilege of participating in the 25th World Masters Athletics Championship at Malaga, Spain, from September 4 to 16. He will take part in the 800-meter run.

But the selection process was no cake walk. The cop had to prove his prowess during the 39th National Masters Athletics Championship, 2018, held at Bengaluru’s Sree Kanteerava Stadium in February. The events were organised for the age group of 35 plus to 95 (men and women). Athletes from all over India were present. “I was one of them and I got selected for the upcoming World Masters Athletics Championship at Spain. I feel very proud to be the only policeman to be selected from Telangana,” he shares.

Balraj’s love for running began at an early age. “I have been actively taking part in running competitions from 1987, from the time I was in school till present,” says the cop who was also the best State Athlete twice for Tirupati and Visakhapatnam.

Not only that, he has also participated ten times in National Athletic meets and also was a part of the 20th Asia Masters Athletics Championship, which was held at Rugao, China, in 2017.

Sharing his fitness secret, Balraj says, “I have a fixed routine. I run every day from 4 am to 8 am. Then I report to duty.” Balraj believes he has achieved so much only because of his coach Rajesh, who is his biggest motivation. Balraj can’t imagine a life without sports. He shares, “I don’t want my kids to waste their time. I will surely engage them in sports.” He feels these days youngsters are not interested in sports activities, and adds, “They will only develop an interest if they get proper guidance like I did. But I don’t see that happening. I feel there are not many good coaches in Telangana, except in Gachibowli. I think this is why we are lacking in sports.”

He feels the authorities must increase the sports quota to encourage sportsmen. Though he’s happy to see India’s performance has become better at sporting events, he rues the lack of proper infrastructure. “I think there aren’t proper gyms nor are there better grounds. Also, people here only respect those who get medals. Otherwise, hard work and participation are not appreciated,” he concludes.