I woke up this morning with emails and messages and of course my normal news updates from Google, all of these had one thing in common!  The news that David Castille whom for many years has been legend on the USATF Masters running scene, performing in events and holding his own against much younger athletes, had in fact done so with the help of Drugs!  In fact doing so well that he managed to earn prize money for his racing success exceeding 60k which does not include any magazine or endorsement deals he had attained.

Mr Castille has received a 4 year ban for the use of Nandrolone, a performance enhancing drug that has been used by so many.  Although this shows once again the level of people will go to win, and shows our sport again in a negative light. What this does show is that no matter your age, or level you will be tested! you will be caught and you will be banned!

This is Track.. no this is Masters Track! We strive to be the best we ca, for as long as we can with all that we have! not with cheating but with hard work and dedication!

Below is the article I awoke to by Lets Run

Kevin Castille, the former drug dealer turned US masters record holder, was handed a four-year ban from the sport by USADA on Thursday for testing positive for 19-norandrosterone, a metabolite of the banned anabolic steroid nandrolone. The positive test was collected at the USATF Masters 10K Championships in Dedham, Mass., in April 2019 — a race Castille won by 90 seconds in 30:47 (he has now been stripped of the title). 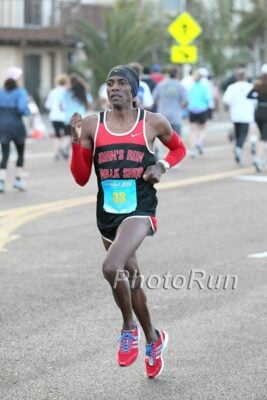 Castille’s story was one of the most compelling in the sport. A solid high school runner in Louisiana, he did not compete for most of his 20s, instead dealing crack cocaine. His life changed after he was sent to prison in 2001 at age 29, and in 2004 he ran a personal best of 28:49 for 10,000 meters to qualify for the Olympic Trials.

Castille’s success deep into his 40s raised eyebrows within the sport.

“Some observers, particularly those who frequent the speculation-friendly LetsRun message boards, claim that his running transformation couldn’t possibly have transpired without the assistance of performance-enhancing drugs,” read a 2016 New Yorker profile.

“A number of things never added up with him from his story, how he randomly popped up at races, trained solo and at his age, was taking on the best in our sport who were 15-20 years younger,” Troop tweeted. “The constant replies were that he was a nice guy.”

Castille’s explanation for his late-career success: not running for most of his 20s had left him physically and mentally fresher than his peers.

According to USADA, Castille initially contested the findings after he was informed of his positive test last year, but dropped his appeal three days before his arbitration hearing was to take place, electing to sign an acceptance of sanction form.