Skip to content
Master-Athlete.Com
Home » Coaching » It is possible to substitute specific training in 400m sprint

It is possible to substitute specific training in 400m sprint for a nonspecific one and achieve the same or even greater improvement?

Nonspecific training will be used in case of bad weather conditions, no track and so on.
Nonspecific – different movement structure, but from a physiological point of view identical to the special endurance training – same HR, same levels of lactate, for example special strength training.

In last three months I done small experiment. I took 8 students from university probably the same age and same sport performance. All of them are active but not professionals athletes. I split them in two groups. One group was performing specific-running training, the second one non-specific (strength training).
Both groups accomplished two training sessions during week the whole training program lasted 6 weeks. I measured PB-personal best in 300 m sprint before and after training program. Every participant performed Wingate test where we measured maximal power during the test. The specific group improved in maximal power by 1,32% in compared with 8,31% improvement in non-specific group.
But more important is that the nonspecific group improved in average PB time (300m test) 0,79s and specific group improved by 0,65s. I know that was a small group and not professional 400 m athletes but still, It shows (in a small scale) that nonspecific training can improve specific performance, despite widely accepted specific principle in training. But the nonspecific training must stimulate the same energetic system used during specific training. 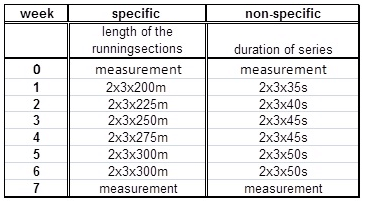 Source: It is possible to substitute specific training in 400m sprint for…